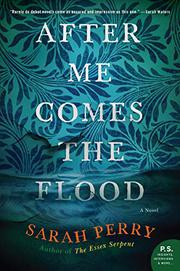 AFTER ME COMES THE FLOOD

In this eerie debut novel from Perry (Melmoth, 2018, etc.), now published in the U.S. for the first time, a man becomes lost in the woods only to be welcomed by a household of strange but passionate residents.

Tired of the summer heat, John Cole sets off from his London bookshop to visit his brother, who lives by the sea. But John never arrives. In the dark Thetford forest, his car breaks down, and he loses his way in the woods. At the end of a path, he reaches the door of a grand mansion. The young girl who opens it seems to recognize him. "John Cole! Is that you? It is you, isn't it—it must be, I'm so glad. I've been waiting for you all day!" So begins Perry's unsettling debut, which shuttles between fairy story and allegory without ever resolving into a single shape or genre. The house is both magnificent and menacing, with "broken chandeliers trailing chipped strings of glass drops," a glass eye constantly changing hands, and empty meat hooks dangling in the kitchen. Consumed with dread and guilt about being an imposter, John chronicles his days with the residents in a journal that reads like a fever dream. There's Hester, a fiercely protective matron and former actress; Elijah, a former preacher who has lost his faith and fears going outside; Walker, a chain-smoking, card-playing devil in a rumpled tuxedo; Eve, a coquettish pianist who longs for attention; and the siblings Clare and Alex, otherworldly changelings who seem at once capable of complete innocence and total guile. Unlike Perry's following two novels, plot matters less than mood here—confusion, uncertainty, and endless possibility unfold over the week of John's stay. Even the sundial in the garden tells "two times at once." What connects this fragile household together? Who is sending Alex cruel poison-pen letters? Why does Eve make John feel "pain set up very low in his stomach…as if hooks had been pushed through his flesh"? And whose place has John actually taken? Like Shirley Jackson, Carmen Maria Machado, and other evocative masters of the gothic, Perry circles closer to answers without ever dispelling the magic that holds her narrative in breathless suspense.

A mysterious fable about honesty and deceit, love and self-loathing, and our sometimes-doomed quests for inner peace.

AFTER THE ECLIPSE
by Sarah Perry
Fiction