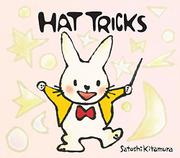 Hattie the magician pulls amazing things out of her hat.

Emerging from her top hat, Hattie, a rabbit, welcomes everyone to her magic show, invites readers to repeat “Abracadabra, katakurico,” and see “what’s in the hat.” Initially, two pointy ears surface and then a surprised cat jumps out. Hattie repeats the same magic words, and the fluffy tail and ears of an energetic squirrel appear. Next Hattie’s magic words invoke a snakelike arm attached to a huge octopus followed by antlers belonging to a gigantic moose. For her next trick, Hattie reveals the gray trunk of an enormous, shocked elephant who’s temporarily stuck in the hat. Surely the hat’s finally empty now? But wait, Hattie has a “grand finale” still to come. The spare, repetitive, interactive text engages readers in chanting the magic words with Hattie and watching expectantly, guessing what will emerge next. The energetic illustrations rely on vivid colors, bold, black, hand-drawn outlines, simple shapes, and plain backgrounds to showcase Hattie in her yellow coat and red bow tie as she conjures the sequence of hilarious creatures from her magical hat. As the animals increase in size, they dominate the double-page spreads until Hattie’s growing menagerie explodes into a wild, wonderful “whole new world of friends.”

BEWARE OF THE CROCODILE
by Martin Jenkins
Children

THE YES
by Sarah Bee
Children

THE HISTORY OF MONEY
by Martin Jenkins
Children