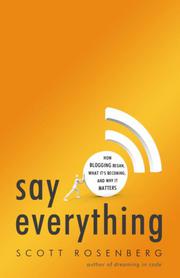 How Blogging Began, What It's Becoming, and Why It Matters
by Scott Rosenberg
BUY NOW FROM
AMAZON
BARNES & NOBLE
LOCAL BOOKSELLER
GET WEEKLY BOOK RECOMMENDATIONS:

In 2003 there were 100,000 blogs worldwide; today there are approximately 184 million. Such phenomenal growth of blogging, which the author defines as “a hybrid of traditional publishing and casual electronic messaging,” was initially due to adventurous, and at times decidedly odd, men and women who both saw the potential in the totally free expression blogging allows and developed the software that made it simple and easy. Rosenberg energetically chronicles these ’90s pioneers, including Justin Hall, who obsessively posted a real-time archive of his life in the early ’90s; Evan Williams and Meg Hourihan, who developed a simple program—subsequently sold to Google—that made blogging accessible to anyone (Williams would later develop Twitter); Robert Scoble and others, who showed, for better or worse, that blogging could be profitable; and Josh Marshall, who made blogging a true journalistic endeavor. As more people have discovered the joys of blogging, what has been created, Rosenberg claims, is nothing less than “a new kind of public sphere, at once ephemeral and timeless, sharing the characteristics of conversation and deliberation.” Blogging allows for new possibilities in form and content and the blossoming of new talent; it’s also fun. Yet Rosenberg also acknowledges the critiques of such an unbridled flood of verbiage. With patient detail—and for the most part jargon-free language—he addresses the concern that the blogosphere is nothing more than a mindless morass of trivia—that it may be creating an “echo chamber effect” where we talk to only those who agree with us, and may lead to cultural disintegration as millions of monologues replace a common discourse. Though he never dismisses them out of hand, the author concludes that these complaints are mostly baseless or overwrought.

Rosenberg suggests that blogging’s “outpouring of human expression” should “delight us.” This fair and fascinating account should delight as well.