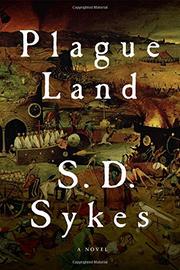 In 1350s England, the bubonic plague has killed thousands and disrupted the feudal system.

Oswald de Lacy, the youngest of his family, is destined to be a monk. His life is turned upside down when the plague carries off his father and older brothers. Oswald and his tutor, Brother Peter, return to Somershill Manor, where Oswald finds himself unprepared to take his father’s place. Then the parish priest, John of Cornwell, announces that a girl has been found buried in a shallow grave, killed by a dog-headed beast. Oswald is a rationalist, but his common-sense approach is easily overridden by the pushy priest and the ignorant peasants, who are all too ready to believe in strange beasts. It’s possible that the dead girl and her sister are Oswald’s bastard sisters. Overwhelmed, Oswald is reluctant to get involved, but Peter urges him to investigate. He tries to dissuade his shrewish sister Clemence from marrying their neighbor Walter de Caburn, a man known for his cruelty. After he goes to de Caburn claiming that Clemence will inherit nothing if she marries and Oswald dies without heirs, de Caburn hatches a plot to murder him immediately. The marriage goes forward, and Clemence is raped and beaten by de Caburn. But Oswald, with the help of Peter, does prevent him from raping a young tenant before de Caburn is found dead and John of Cornwell, whose illicit wealth and power are increasing, accuses Oswald of his murder. Oswald fights for his life, revealing a series of devastating, long-hidden secrets.

Sykes’ debut, the first of a planned series, immerses the reader in the filth and ignorance of medieval Kent, presents a puzzling mystery and introduces a hero who grows in stature as his problems increase.

THE BUTCHER BIRD
by S.D. Sykes

THE MYSTERIUM
by P.C. Doherty
Mystery

THE MANSIONS OF MURDER
by Paul Doherty
Mystery