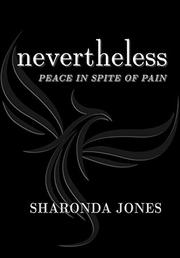 A woman chronicles her aching journey from loveless loneliness to solace in Christian spirituality.

Debut author Jones was born in Charlotte, North Carolina, and her memories of the first five years of her life are “idyllic.” She was poor, but that deprivation taught her “grateful humility,” and she found consolation in the simple predictability of her youthful life. But that serenity was shattered when her mother left stealthily under cover of night with the author in tow in order to avoid a forthcoming eviction and the wrath of her live-in boyfriend. In what remained of Jones’ youth, she endured a dizzyingly transient life, shiftlessly attending six elementary schools, with her custodians often changing quickly as well. Her mother was an unreliable source of love and assurance, and, as a result, the author experienced painful degrees of “withdrawal and isolation.” At one point, Jones and her mother found themselves on the street, evicted from their home. The author turned to others for affirmation and, in her middle school years, was dangerously promiscuous and brutally raped. She had an abortion at the age of 15. But Jones found “solace” in schoolwork and not only graduated from high school as valedictorian, but was also offered a full scholarship to George Washington University. In addition, she ardently reaffirmed the Christianity of her youth and became a “born-again believer,” a choice she passionately recommends to readers: “Allow God’s love to free you from repeating cycles of hurt, abuse, and unforgiveness before they become fixed in your mind’s picture of yourself. Allow your dreams to help shape who you will become rather than remind you of the hurt you used to live.”

Jones’ life has been astonishingly dramatic—at one point, she entered a witness protection program with a boyfriend, a deceitful, violent gangster. She was so addled with an “overwhelming sensation of suffocation”—plagued by loneliness, anxiety, and a lack of self-confidence—that she attempted suicide. Amazingly, she recounts her remarkable story without bitterness or resentment but rather with a profound sense of gratitude for her eventual success and peace of mind. Her depiction of her emotional torment is achingly poignant. Speaking of her inability to win her mother’s attention, she writes: “It was agony. Even as a young child, I wanted to close my eyes to life so the sad loneliness would go away. It was like I was trapped inside a roller coaster car, alone to myself because I felt no one understood me or could rescue me from the isolation I carried.” Her prose can be unwieldy and wooden, but it never lacks lucidity, and its unflinching candor can be powerful. Jones’ story is an unabashedly Christian one—she speaks at length about the comforts she found in God, the temptations of Satan, and the power of prayer—and so her tale is unlikely to appeal to those unmoved by religion. In addition, this is a very personal memoir—the author provides a minutely detailed chronicle of her life, including family photographs—and may not sustain the attention of readers who don’t know her.

An affecting but idiosyncratic memoir about spiritual discovery.