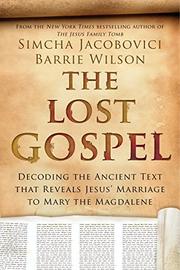 Exploration of a long-forgotten text.

Filmmaker Jacobovici (co-author: The Jesus Discovery: The Resurrection Tomb that Reveals the Birth of Christianity, 2012, etc.) and researcher Wilson (Humanities and Religious Studies/York Univ.; How Jesus Became Christian, 2008, etc.) collaborate to popularize a little-known sixth-century text known as Joseph and Aseneth. The story, ostensibly about the Old Testament patriarch Joseph, was originally known to be written in Greek but now survives, in its oldest form, translated into Syriac. The authors dedicate a sizable portion of the book to a new English translation of the text, along with notes. They argue that the strange and anachronistic story is in fact a hidden Gnostic Gospel, which, when properly decoded, provides a wealth of detail about the life of Jesus and his wife, who the authors claim is Mary Magdalene. The authors argue that past interpreters ignored the early church’s trend toward typological analysis of the Old Testament, through which Christian motifs were located within the Hebrew Scriptures. Instead, they claim that Joseph and Aseneth should be read as a “disguised historical narrative.” The authors argue this “gospel” gives details of the personal life of Jesus: “It tells the story of how Jesus met his wife, how they married, and how they had children.” However, many readers will find Joseph and Aseneth allegorical at best, hopelessly mysterious at worst. It is only through what appears as speculation that Jacobovici and Wilson piece together a fantastical tale of love, intrigue and, of course, sex, around Jesus and Mary Magdalene. Wrapped in the modern trend to discount New Testament writings and push forward even the most tenuous Gnostic texts, the authors write that “[w]hat seemed like fantasy is actually history, and what seems like history turns out to be carefully edited spin.” Yet the authors’ subjective tone, dramatic language and willingness to stretch logic leave readers skeptical from the first page.

This intriguing ancient text deserves a solid academic study by serious scholars. Unfortunately, this book is not it.

THE QUEST FOR MARY MAGDALENE
by Michael Haag
Nonfiction

JESUS BEFORE THE GOSPELS
by Bart D. Ehrman
Nonfiction

THE WIFE OF JESUS
by Anthony Le Donne
Newsletter sign-up