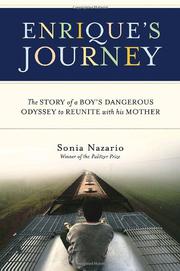 The Story of a Boy’s Dangerous Odyssey to Reunite with His Mother
by Sonia Nazario
BUY NOW FROM
AMAZON
BARNES & NOBLE
GET WEEKLY BOOK RECOMMENDATIONS:

An expanded version of Nazario’s Pulitzer Prize–winning articles, originally published in the Los Angeles Times, about the harrowing journey hopeful immigrants take from Central America through Mexico into the U.S.

The twist on this familiar story is that in recent years, a growing number of America’s illegal immigrants are women. Unable to feed and clothe their children, they leave their homes in Honduras or Guatemala and head for a better life in el Norte. Once in America, Mami sends back as much money as she possibly can and promises to return to her children as soon as she builds up a nest egg. But low-paying jobs as nannies or maids don’t allow the women to save much, so immigrant mothers don’t return home for years, if ever. Their children, too young to understand the heartbreaking calculus of economics and maternal self-sacrifice, feel abandoned. Some of them eventually undertake the pilgrimage through Mexico and across the border, hoping to reunite with their mothers. Nazario’s account focuses on Enrique, left in Honduras by his mother Lourdes when he was six. Eleven years later, he decides it is time to find her. He must avoid immigration offices, who would send him back home, and the gangsters who regularly steal from, rape and even murder migrants. Enrique risks his life, riding through Mexico on the roofs of what child migrants call El Tren de la Muerte (the Train of Death). Enrique makes it to North Carolina, but he and Lourdes are in for an emotional shock. During the long years of separation, mother and son have idealized one another; their reunion exposes resentments that have festered over the years.

This portrait of poverty and family ties has the potential to reshape American conversations about immigration.

THE FAR AWAY BROTHERS
by Lauren Markham
Fiction

THE LULLABY OF POLISH GIRLS
by Dagmara Dominczyk
Indie

THE ONLY ROAD
by Alexandra Diaz
Nonfiction