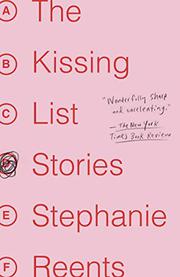 “Kissing” introduces us to most of the continuing characters through the eyes of Sylvie while she is a graduate student at Oxford. She sketches a tangled web of flirtations, sexual relations and betrayals among various expat Americans that continues back in the States, where unsettled, disconnected maneuverings are the norm for young people unsure of who they really are. We don’t much like Sylvie at the end of the next story, “Roommates,” when she moves out of the Manhattan apartment she shares with cancer-stricken Laurie; her oddly noncommittal relationship with Lance, a considerably older doctor from her Western hometown, is off-putting as well. Reluctance to engage is a temptation for much of this collection, which examines marrying for money (“Love for Women”), drifting in and out of jobs (“Temporary”) and weird sex (“Little Porn Story”) as strategies these smart, anxious women use to delay figuring out what they really want from life. But everyone grows up, whether they like it or not. The strongest stories, “Games” and “Awesome,” plumb Sylvie’s insecurities and show her learning to be more accepting, less concerned with the impression she makes. The weakest, Laurie’s delusional, cancer-stoked reverie in “Disquisition on Tears,” strays too far from the plain, realistic plot and character development that is Reents’ forte. Gratuitously baroque developments in a few tales also suggest an author still not entirely clear about the essential nature of her talent. On the whole, however, Reents impresses with her knowledge of conflicted young-adult hearts and her astute portrait of their social lives during the years in which the graduates of fancy colleges haven’t yet figured out who will make it big and who will merely get along.

Sharp work from a promising writer who might do even better with the broader scale of a novel.