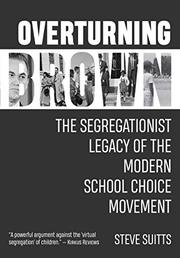 A civil rights activist and attorney convincingly demonstrates that Brown v. Board of Education barely put a dent in unequal public schooling.

As Suitts (Hugo Black of Alabama: How His Roots and Early Career Shaped the Great Champion of the Constitution, 2005), the founding director of the Alabama Civil Liberties Union, notes, the Deep South was the epicenter of resistance to school desegregation in the 1950s and ’60s. Politicians such as Orval Faubus, Jesse Helms, and George Wallace may have stood in schoolhouse doors and filed flurries of lawsuits, but, in the end, more sophisticated adherents to the segregationist cause found a subtle workaround: They would create a parallel system of private schools that could maintain racial separation while also benefiting from public dollars in the form of tax credits, vouchers, and even direct payments. There were countless faux declarations of “freedom of choice,” so long as black parents did not choose to send their children to white schools, while at the same time eliminating “any suggestion from the state constitution that there is a right of education or an obligation of the state to fund public schoolchildren.” Those schemes have since spread nationwide and are now ardently promoted by the likes of Betsy DeVos, the sitting secretary of education, part of whose considerable fortune comes from investments in private schools. “Freedom of choice” was subsequently enshrined by the libertarian economist Milton Friedman, whose utterances are held sacred by the right. As Suitts shows, although the cast of segregationist leaders of the past has been narrowed to “a small rogues’ gallery,” their legacy is widespread and their followers are legion while “contemporary private school patterns and practices…appear for what they are: legacies of class-based southern segregation used to evade Brown and multi-dimensional segregation of non-southern states before Brown.” Indeed, writes the author, more than half of American states now use vouchers to support private schools with public funds, making it likely that inequality will continue for a long time to come.

A powerful argument against the “virtual segregation” of schoolchildren enabled by vouchers, credits, and other instruments.