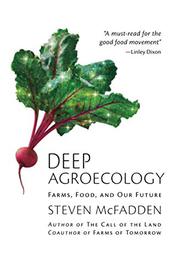 The way that most of the country approaches farming is not sustainable, according to the author; widespread pesticide use, genetically engineered seeds, and factory farms all contribute to the rapid loss of valuable topsoil and to fragile ecosystems. And with a worldwide epidemic of pollution contributing to climate change, he notes, the state of our food system is more precarious than ever. Enter deep agroecology, a revolutionary approach to farming and food that, the author asserts, has the potential to heal the planet before it’s too late. He defines it as an approach to farming and food that is “clean, sustainable, humane, egalitarian, and just, rooted in ecology, other sciences, and indigenous knowledge.” In this book, he hopes to present a general overview of his concept while also offering concrete examples of deep agroecology in action. He does so in several ways, including discussions of the history of agrarian idealism, and detailed reports and statistics on the damage done by modern farming and explanations of how it came to be the dominant form of production. Because deep agroecology draws on a combination of science and ancient wisdom, it also highlights how many indigenous cultures have, for centuries, recognized the importance of strong, healthy communities, and how they’re dependent on the planet on which they live. Overall, McFadden puts forth a convincing case that farms are the basis of civilization, and that if humanity is to survive, it must pursue different principles and a new philosophy. McFadden is an independent journalist who’s authored several books on a range of subjects, and his prose is always clear and easy to understand. Although he covers a lot of material, he does so successfully by consistently returning to familiar themes and arguments, as when he repeatedly points out how most people lack a spiritual connection with the planet, which has had a profound impact on their awareness of environmental problems.

An enlightening work of ecological thought.