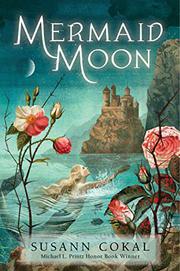 Printz Award honoree Cokal (The Kingdom of Little Wounds, 2013, etc.) switches from historical fiction to historical fantasy in this loose reinterpretation of Andersen’s “The Little Mermaid.”

The Thirty-Seven Dark Islands, remote and Scandinavian, are prosperous and bustling. Ruled by the (uncannily) long-lived Baroness Thyrla, watched over by Our Lady of the Sea, an ostensibly Christian statue, this is a place where little changes until a mysterious girl comes ashore. Half-seavish Sanna has grown up a marreminde but longs to find her landish mother. She studied magic in order to form legs and search the land, directed by her flok’s ancient witch. Literary writing stuffed with interesting if ancillary historical detail moves through several perspectives. Sanna, despite her strong magic and the narrative’s centering of her quest for her mother, tends toward immense passivity; Thyrla, a wicked witch who has killed her own children to prolong her life, propels most of the plot, such as it is, and more time is spent in characters’ heads than with their actions or interactions. Questions of power, vanity, and faith are raised, if not always resolved, making this a book suitable for deep reading although unlikely to have wide appeal. Other options trawl similar territory more effectively, particularly Elana K. Arnold’s Damsel (2018) and Margo Lanagan’s The Brides of Rollrock Island (2012). All characters are white; the mermaid society is bisexual by default.