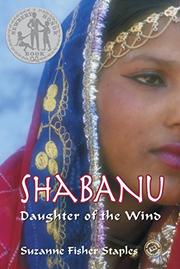 Using the present tense and the voice of Shabanu herself, this splendid first novel takes the reader, with astonishing immediacy, into the life and mind of a courageous, intelligent Pakistani girl.

Born to a close-knit family of camel herders in the Cholistan Desert, Shabanu and her sister are promised to two brothers, well known to the girls because they are their cousins. But a disaster--arising from the very nature, of their traditional, paternalistic society, where custom is often more powerful than the rule of law and cruelty is commonplace--changes this plan, and Shabanu is faced with marriage to a wealthy old man, as his fourth wife. This sets her a lonely choice: it may be possible to escape, but only at great cost to the rest of her beloved family. Staples, who spent years in Pakistan as a UPI correspondent, writes beautifully. She includes a wealth of fascinating detail that gives her story authenticity and a strong sense of place, with no trace of didacticism. Her characters are individual in their strengths and idiosyncrasies, universal in their goals and needs, and representative of their unique culture--which the author perceives with clear-eyed affection, even as she makes vivid the status of women whose chief duty is obedience and whose destinies are entirely in the hands of their men.

An unforgettable heroine set like a fine jewel in a wonderfully wrought book. Map, pronouncing list of names, glossary.

THE HOUSE OF DJINN
by Suzanne Fisher Staples
Children

UNDER THE PERSIMMON TREE
by Suzanne Fisher Staples
Children

WRITTEN IN THE STARS
by Aisha Saeed
Newsletter sign-up