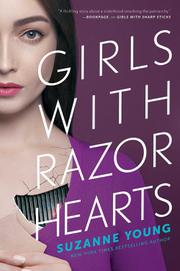 After a daring escape from Innovations Academy with the help of Leandra, the headmaster’s wife, Mena, Sydney, Marcella, Brynn, and Annalise set out to destroy the architects of their repression in the follow-up to Girls With Sharp Sticks (2019).

They’re free for now, but the headmaster will soon be looking for them. After all, they’re worth millions to the school and, its investors. Leandra enrolls Mena and Sydney in Ridgeview Prep in Connecticut to root out the son of an investor who may have the power to stop Innovations. To their dismay, the girls discover that misogyny and sexism are rampant in the outside world, but they could have an ally in the form of a talented hacker named Raven. However, it soon occurs to Mena that they may have jumped from the frying pan into the fire. Spot-on observations about society’s problematic, repressive, and violent treatment of women and girls pepper the narrative, and the powerful message that women should support and love one another is bolstered by a female-centric cast who unfailingly have each other’s backs. This entry lacks some of its predecessor’s spark, but a few twists keep the pages turning and leave plenty of loose threads for future installments. Mena, Annalise, and Brynn seem to be white, Sydney is black, Marcella has brown skin, and there’s some diversity in secondary characters. There is a same-sex romance.

A food-for-thought dystopian with a strong feminist message. (Dystopian. 13-18)