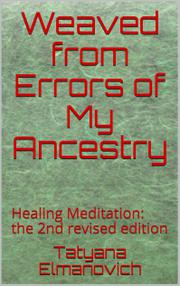 WEAVED FROM ERRORS OF MY ANCESTRY

A semiautobiographical work explores one woman’s ancestors and Russian history.

As Elmanovich (In Eternity, 2015, etc.) asserts at the outset, the pages that follow are based on recordings of her conversations with ghosts. The author, born to a Russian family living in Estonia, settled in the United States at the age of 55. Now in her 80s, she is a medium able to “hear voices of spirits and angels.” The specters in this collection tend to be deceased family members, some of whom Elmanovich never met while they were living. All have a connection to Russia and Estonia. There is the author’s Aunt Tatyana, who died at 11 and explains the reasons for her death. Elmanovich’s Uncle Jurik speaks from beyond the grave about the World War II siege of Leningrad. Her maternal grandmother, Anna, with the aid of a spirit helper named Hildegard, explains the circumstances of a horrendous marriage. The ghosts do not merely speak of the earthly realm. They have much to say about the “4D astral world” and some of it is surprising. For instance, cocaine is used by some in the afterlife to alleviate their woes. As one user explains, “Narcotics lift me to another vibration for a while.” An afterlife pregnancy even proves to be a possibility. Throughout the book, there are also bits and pieces of the author’s own life. She is a former film critic whose decades of experience have taught her that all people are flawed. As she explained to her brother, “Ideal people do not exist in reality.”

Elmanovich’s ambitious work covers a wide range of material in a fairly small amount of pages. A family history of the Bolshevik Revolution, existence in an astral world, and the difficulties of coming to America are captivating topics that could each fill a volume. The variety of intriguing subjects provides much to take in, though the interweaving can be clumsy. No sooner are readers told of the terror brought upon civilians by Kronstadt sailors in revolutionary Russia than shortly thereafter they learn of a Korean War veteran named Jose Martinez, a clairvoyant who died before his 60th birthday of a drug overdose. And though the many pieces are sometimes jumbled or wild (astral world narcotics?), the book presents a number of potent points even for the skeptical. For example, discussing the horrors of Leningrad is no simple matter for a spirit like Jurik. The work explains how survivors know that their words will “never reach their listeners’ mind and emotions completely” because those without direct experience cannot fully appreciate what happened. Nevertheless, Jurik’s tales still have much to tell the audience. Similarly, readers may want to know more of the author’s story. Her abilities as a medium are stated as matter-of-factly as her arrival in America. But what does it fully mean to be a medium? When and how did she know she had this ability? The book ultimately covers a multitude of topics yet it leaves a host of unanswered questions.

While it delivers an enticing glimpse of the past and the afterlife, this account becomes convoluted at times.