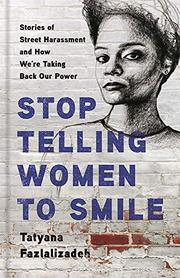 Stories of Street Harassment and How We're Taking Back Our Power
by Tatyana Fazlalizadeh
BUY NOW FROM
AMAZON
BARNES & NOBLE
LOCAL BOOKSELLER
GET WEEKLY BOOK RECOMMENDATIONS:

Anger fuels an artist’s project to publicize the prevalence of street harassment.

Painter and street artist Fazlalizadeh makes a compelling book debut that expands her public art series “Stop Telling Women to Smile.” The series began when she mounted three posters she drew of women’s faces—her own and two friends’—each captioned with a single sentence in protest of street harassment: “My Name is Not Baby, Sweetie, Sweetheart, Shorty, Sexy, Honey, Pretty, Boo, Ma” and “Women Are Not Seeking Your Validation.” As the posters gained attention, the project grew into interviews with—and portraits of—many women who talked about their experiences with vulnerability, fear, and mental, emotional, and physical exhaustion. “Street harassment,” writes the author, “is not an isolated issue” but rather part of “a long history of aggressive sexualization” that includes domestic abuse and sexual assault. Fazlalizadeh cites research showing that between 40% and 60% of women attest to having experienced street harassment in the Middle East and North Africa; 65% in the U.S.; 79% in India; 86% in Thailand and Brazil. She cautions against viewing men’s comments as evidence of sexual attraction; harassment, she writes, “is ultimately about power and dominance.” Most of the 10 women portrayed in this book recall being harassed even as children, often by adult men. “It’s always shocking how young we were,” one Asian American woman reveals. “When I was young,” a queer, gender-nonconforming Latinx reveals, harassment felt like “the cornering of a younger body into a very sexualized being.” Asian women and women of color often encounter stereotyped sexualization. “Not Your Asian Fetish, China Doll, Geisha,” one woman’s poster reads. Several interviewees identify as queer and one as trans, presenting an image that seems to threaten some men. “For a couple composed of two women,” street harassment “will likely be layered with homophobia.” By capturing women’s rage and frustration, Fazlalizadeh hopes to create empathy, “ignite actions and engage communities of people.”

A graphic and often moving contribution to the important conversation about endemic sexism.