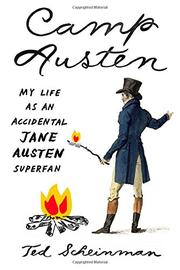 A light and frothy tour of Austenworld and its Janeites.

“I didn’t last in Austenworld,” writes Pacific Standard senior editor Scheinman, “but for a time it was ludicrous, intoxicating, and sometimes heartbreaking.” If his mother hadn’t been a noted Austen scholar, he “might never have found [his] way in.” When young, he started with Austen’s juvenile notebooks, Austen’s own “record of fandom,” filled with “perverse celebrations of her literary enthusiasms.” In his witty, sly, and often humorous first book, Scheinman discusses his time as a graduate student when one of his graduate professors decided to hold the first-ever Jane Austen Summer Camp. “American enthusiasm for Austen is (as I would soon learn) passionate to the point of obsession,” he writes. At first, it “sounded dreamlike, a little unreal.” He notes that in the late 19th century, scholar and critic George Saintsbury coined the term “Janeite” for those devoted to her work, and the great novelist E.M. Forster was “one of the more conspicuous Janeites of his age.” To Scheinman, the gathering reminded him of a “religious diaspora, a far-flung church, whose functionaries convene in heterodox worship.” Let the tour begin. First, the costumes: “Dressing as Mr. Darcy at an Austen symposium is like playing Mickey Mouse at Disney World.” Then the panels, where “representatives of the academy” would mingle with “their civilian counterparts.” Followed by a little table talk at meal times: “they offer the most gossipy and delicious interactions.” Next, the theatricals, plays about Austen and her characters written and performed (in costume) by participants as well as screenings of films about Austen’s books. Last but not least, there’s the Ball. After all, Henry, Austen’s favorite brother, wrote that Jane “enjoyed dancing, and excelled at it.” Scheinman picks and pokes a little here and there, but he admits it’s “some of the best and cleanest fun available to an academic.”