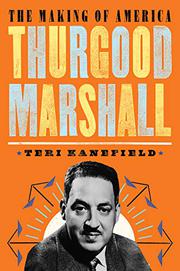 America’s first African American Supreme Court justice had a profound impact on constitutional law both before and during his time on the bench.

Thurgood Marshall, with his keen intellect, personal drive, and passion for justice, fought through the difficulties of the Jim Crow era in the United States. His personality allowed him to cope with the harsh realities of challenging the enduring systemic discrimination. While attempting to scrape out a living as a private attorney, Marshall also found time to tackle civil rights cases and helped win the case that ended segregation at the University of Maryland Law School, the same law school that denied him entrance. When Charles Houston, his former Howard Law School dean, offered him a position at the NAACP, he leapt at the opportunity. His success there with Brown v. Board of Education and other cases brought him to the attention of President Lyndon B. Johnson, who ultimately appointed him to the Supreme Court. As in others in Kanefield’s series, readers see how her subject’s early life and career influenced his outlook on how the U.S. Constitution should be interpreted and applied. Kanefield’s narrative is lively, and she provides important context where needed, such as how even though Marshall and Dr. King agreed on the need for change, Marshall did not agree on King’s strategy of civil disobedience.