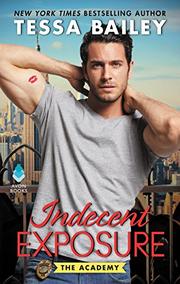 When an Irish firearms instructor discovers the sexy stranger she met outside a bar is one of the police academy cadets she’s training, she tries to avoid him, but he proves too tempting, too volatile, too damaged…and ultimately too perfect for her.

After years training for the Olympics and working with the Irish Garda to become a firearms consultant, Katie McCoy is finally free from her extremely disciplined life and intends to kick up her heels during a short stint working with the NYPD in New York. She has a checklist: find some historical mob-hit scenes. Be adventurous. Have a love affair? But she doesn’t expect gorgeous and magnetic Jack Garrett. “Now, at the first sign of freedom, I’m thrown right into the arena with James Dean’s great-grandson.” When they meet, sparks fly, and despite some reservations, she agrees to meet him again. Discovering he’s one of her police academy students makes her reconsider, but their attraction is compelling. In addition, though Jack is a naturally talented shooter, he's a problematic recruit. Katie finds it confusing to try to help him live up to his potential while figuring out how to navigate their attraction despite the possible professional ramifications—all the time knowing she’ll be leaving in less than two weeks. Then she realizes he has a drinking problem caused by some deep-seated issues that she’s ill-equipped to handle. Still, something about Jack helps Katie live more authentically, and something about Katie helps Jack consider fidelity and healing. Bailey (Follow, 2017, etc.) continues The Academy series with blazing-hot (and at times graphic) sex scenes, deeply affecting emotional conflicts, and two flawed characters who are devoted to each other yet out of their depth. Help from a loving, steadfast secondary cast strengthens the story and the series.

LOVE HER OR LOSE HER
by Tessa Bailey
Fiction

FIX HER UP
by Tessa Bailey
Fiction

A SURE THING
by Marie Harte
Fiction

UNDER HER SKIN
by Adriana Anders
Fiction