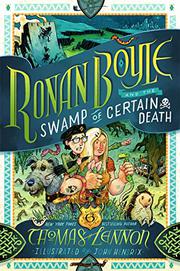 RONAN BOYLE AND THE SWAMP OF CERTAIN DEATH

Following Ronan Boyle and the Bridge of Riddles (2019), the further zany adventures of an anxiety-prone 15-year-old member of the Garda Special Unit of Tir Na Nog, i.e., Irish faerie fighter.

Despite his incompetence, anxiety, and absolute lack of courage, young Ronan Boyle is off again to the enchanted side of Ireland, to capture Lord Desmond Dooley, the man who framed Boyle’s parents for theft of an ancient mummy, the Bog Man, and to rescue his captain, who fell into Dooley’s nefarious hands. Accompanied by the formidable Log MacDougall, a human raised by leprechauns, and an Irish wolfhound named Rí, he braves a wild variety of horrors, including a unicorn spa town, where he appears in a musical revue, and the titular Swamp of Certain Death. As in the first volume, the tale is snort-out-loud funny on the sentence level, but the plot, such as there is one, approximates the inside of Ronan’s noggin: “a hamster on a Mobius strip, running frantic laps to nowhere.” It’s highly enjoyable to a point, and then the utter lack of cause and effect begins to wear readers down. One could skip any or all of 90% of the scenes in this book and never notice. As far as race goes, the unicorns come in all colors; Ronan is depicted as white on the cover.

RONAN BOYLE AND THE BRIDGE OF RIDDLES
by Thomas Lennon
Children

SHOOTING AT THE STARS
by John Hendrix
Newsletter sign-up