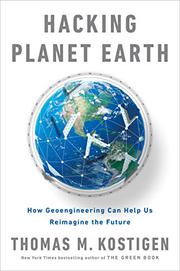 As award-winning science journalist Kostigen (National Geographic Extreme Weather Survival Guide, 2014, etc.) points out, humans add 40 billion tons of carbon dioxide to the atmosphere every year, an amount that’s rising steadily despite current efforts to curb it. Since grassroots endeavors have not worked, the author proposes that “industry, the sector of society responsible for much of human-caused global warming…has to turn things around and lead the charge to help mend our climate.” Innovators—entrepreneurs, scientists, and technologists—must “do what they do best: invent, pioneer, disrupt the same old ways of doing things.” Traveling the world, Kostigen turns up individuals and organizations that are doing just that. A proposed giant laser will zap clouds, producing rain where it’s disappearing. Warming oceans produce more hurricanes, but ingenious machines can mix the hot surface and cool depths. Millions of artificial trees (invented 10 years ago) would soak up carbon dioxide as fast as it is being produced. By the halfway point, the author has turned from preventing global warming to proposing how humans might live in the future, whether hot or not. Kostigen provides plenty of intriguing accounts of underground cities, vertical farms, artificial meat, genetically modified food, and the quest to effectively turn sewage into drinking water. We are a problem-solving species, so, as conditions worsen, we will go into action—though much more should have already been accomplished—but many of Kostigen's projects require spectacular technological advances, worldwide cooperation (to raise the trillions of dollars necessary), or the wisdom to avoid the disastrous side effects of tampering with nature that occurred followed previous tampering. Still, since self-denial has failed and national governments refuse to inconvenience carbon-producing industries—including the United States, even under Barack Obama)—many experts besides Kostigen are pinning their hopes on technology.

A highly optimistic, sincere account of those leading the charge to solve a grave problem that some still choose to ignore.

YOU ARE HERE
by Thomas M. Kostigen
Newsletter sign-up