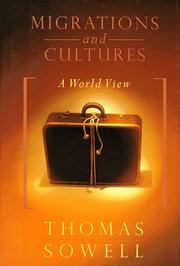 Sowell here fills in some of the background on ethnic groups he surveyed in his 1994 Race and Culture. Paradoxically, perhaps (because the author has seldom lacked the courage of his resolutely conservative convictions), the result wants for the impact a more rigorous analysis of its frequently fascinating anecdotal detail could have provided. While the world grows both smaller and more fragmented by the day, Sowell observes that globally dispersed ethnic groups continue to play important roles in countries foreign to their heritage. In aid of this premise, the author canvases six peoples--Germans, Japanese, Italians, Chinese, Jews, and Indians--who have made themselves commercial/cultural forces beyond their homelands. While these transnational tribes have vastly different pasts, the author (a senior fellow at Stanford University's Hoover Institution) suggests they share certain adaptive attributes, including a passion for education, industriousness, family ties that bind, and a sense of mutual dependence that helps them adjust to sociopolitical or economic change without significant loss of unity. He draws largely on historical narratives and statistical data (much of which is ten or more years old). Thus, he recounts how Jews, prior to the 1948 establishment of Israel, gained an economic foothold as minority middlemen in nations throughout Europe, the Middle East, the Americas, and even Asia. At the same time, entrepreneurial Indians, unable to prosper in the subcontinent's crowded, caste-ridden milieu, flourished in the diamond trade, entertainment, finance, and high-tech enterprises that place a premium on engineering skills in venues far from the mother country. By contrast, Sowell points out, over 80 percent of 36 million overseas Chinese have made their way in Asia, closer to their ancestral homes than most expatriate groups. But Sowell reaches precious few conclusions about the implications of mankind's chronic mobility. In consequence, his fact-filled text falls well short of its potential to inform, let alone enlighten.
Pub Date: April 1st, 1996
ISBN: 0-465-04588-X
Page count: 512pp
Publisher: Basic
Review Posted Online: May 20th, 2010
Kirkus Reviews Issue: Feb. 15th, 1996

THE QUEST FOR COSMIC JUSTICE
by Thomas Sowell
Newsletter sign-up