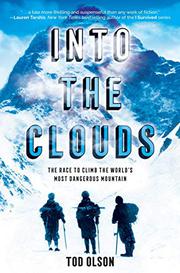 K2, at 28,250 feet, is the second-highest mountain in the Himalayan chain and is considered by climbers the most difficult of the over-8,000-meter peaks, of which Everest is the highest. In 1938, when Olson’s gripping tale begins, no one had climbed K2. Medical student Charlie Houston and his handpicked team were tasked by the American Alpine Club to scout a route up K2 so that another team headed by climber Fritz Wiessner could summit the following year. Enduring frigid cold and danger, Houston and another climber reached 26,000 feet before descending. Wiessner’s attempt the following year, plagued by poor management, failed to summit also and resulted in four deaths. Fifteen years later, in 1953, Charlie Houston tried again. Olson writes with assurance and empathy, detailing the nearly unbelievable hardships borne by the climbers and narratively balancing the individuals’ obsession to summit against the humanity of the so-called “brotherhood of the rope”—climbers are roped together, therefore literally dependent on one another for their lives. He takes care to include the porters and Sherpas of these early expeditions—too often considered merely as servants by the wealthy white men who hired them—by including photographs and giving them equal credit in his narrative.