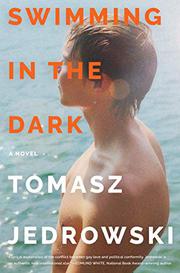 SWIMMING IN THE DARK

A young gay man enters into a clandestine affair in the repressive political climate of communist Poland in the early 1980s.

From his new home in the Polish community of Greenpoint, Brooklyn, Ludwik addresses this narrative to Janusz, the handsome university student he met at an agricultural “work education” camp outside Warsaw in the summer of 1980. His first sighting of Janusz is a pure coup de foudre, described in typically swoony terms: “A flash of heat traveled from my stomach to my cheeks, my thoughts jumbled like a ball of string….It was as if your presence already overpowered me, like a prophecy I was unable to read.” Their summer romance, initiated during a hiking trip to the lake district, is an idyll that cannot last; the gray realities of Warsaw life—food and medicine shortages, tight party control over university advancement, an emerging protest movement subject to crackdown—will come between the lovers. While Ludwik imagines leaving the country to escape its oppressions (James Baldwin’s novel of gay expatriate life in Paris, Giovanni’s Room, is a touchstone), Janusz dates Hania, the daughter of an apparatchik, in order to enjoy special privileges. “Everyone is leading someone on,” Janusz explains. “So what’s wrong with taking things into your own hands and not letting yourself go under?” Their conflict comes to a head during a debauched weekend at the country estate of Hania’s family, leading Ludwik toward his eventual fate. Debut novelist Jedrowski, born to Polish parents in Germany and now living in France, writes confidently in English—though his prose can turn overripe and his characters feel undernourished.

A broody tale of gay love and life behind the Iron Curtain.