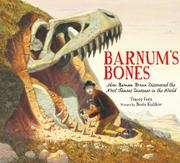 Presenting Barnum Brown, who, from the time he was named for circus impresario P.T., was destined to do unusual, important things.

Obsessed from childhood with fossils—and blessed with an uncanny knack for finding them—Brown began hunting dinosaurs in the American West in the late 19th century. He was hired by New York’s Museum of Natural History to find specimens, since that institution had no dinosaur collection at the time. Discover them Brown did, though he didn’t unearth any new species—until, after several years of painstaking labor, he discovered the bones, including an intact skull, of the new creature he’d longed to find, later dubbed Tyrannosaurus rex. His “favorite child” took the world by storm, and the dapper Brown, in a career spanning more than six decades, went on to discover more dinosaur fossils than anyone. Fern fills her text with all the salient facts but uses a breezy, humorous, awestruck voice that strikes just the right tone in telling the story of this fascinating, quirky scientist. Kulikov’s wittily energetic, earth-toned watercolors enliven the text and add to the fun and interest.

Children who gawp at dinosaur exhibits will realize a new appreciation for those who devote their lives to finding and resurrecting extraordinary animals from eons past. And who doesn’t love T. rex? (author’s note, bibliography) (Informational picture book. 7-11)

TUA AND THE ELEPHANT
by R. P. Harris
Children

TRACTION MAN AND THE BEACH ODYSSEY
by Mini Grey
Children

W IS FOR WEBSTER
by Tracey Fern
Children

DARE THE WIND
by Tracey Fern

HOW TO FIND AN ELEPHANT
by Kate Banks
Children

W IS FOR WEBSTER
by Tracey Fern

THE DINOSAURS OF WATERHOUSE HAWKINS
by Barbara Kerley
Children

AWESOME ADVENTURES AT THE SMITHSONIAN
by Emily B. Korrell
Children

THE SKULL IN THE ROCK
by Lee R. Berger
Children