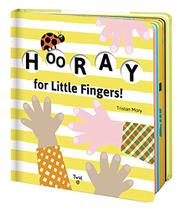 In this concept book introducing the numbers one to 10, little fingers are invited to participate in the counting.

Five round die cuts on the cover—just the size for a handful of fingers to poke through—set the tone in this French import. Young readers are encouraged to place a finger through a hole on an elephant’s face to make its trunk: “1 little finger…tickles your nose!” As the numbers progress, children can put two fingers through the die cuts to make a crab’s claws and “pinch, pinch”; three fingers can be a ladybug’s right feet and “climb up, up, up”; four fingers can be a monkey’s extremities and “do a silly dance”; and five little fingers at the tips of a star make it look like they “twinkle, twinkle just for you.” Up to this point the book works well, but then it rushes to an unsatisfying end. After little ones count “1, 2, 3, 4, 5 little fingers…” on verso, they then count a further “and 1, 2, 3, 4, 5 more!” on recto, which feels as though they’ve been asked to add 5 + 5—math beyond their years. A sixth die cut is also there: “Oh, what’s this?” Children will wonder how they can find an 11th finger. As readers turn the page they will find two hands with 10 splayed little fingers and a “wiggly, wiggly caterpillar!” creeping up the right wrist.

A clever concept is marred by a hasty, ill-considered ending. (Board book. 1-3)