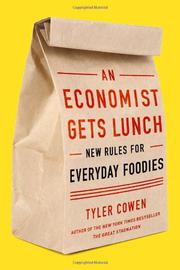 AN ECONOMIST GETS LUNCH

Food and economics meet in this entertainment by celebrity economist Cowen (The Great Stagnation: How America Ate All the Low-Hanging Fruit of Modern History, Got Sick, and Will (Eventually) Feel Better, 2010, etc.).

A celebrity economist? Yes, for Cowen is widely hailed for his smarter-than-freakonomics, libertarian-inclined economics blog Marginal Revolution on one hand and his D.C.-centric blog Tyler Cowen’s Ethnic Dining Guide on the other. Here he blends the best of both those worlds. If you’ve heard of the free-rider problem in economics, where leeches benefit from the productivity of others, then here’s a twist: “the wealthy and the myopic are the friend and supporter of the non-drinking gourmand.” In other words, the knowing customer may well choose to avoid drinking anything other than water, knowing both that the markup on alcohol and soda is astronomical and that those who buy such things effectively lower the tariff on the price of a meal, where the margins are slimmer. In economic terms, this “price discrimination” favors the teetotaler, and with nary a hint of moralizing. Cowen stops short of formulas and equations, but there’s plenty of hard, old-fashioned economic thinking in these pages—e.g., the power of immigration to improve cuisine and the bewildering array of food choices we have today as one of the blessings of free-market capitalism. Cowen is also prepared to go into the fray as a mild-mannered version of Anthony Bourdain. He writes that one shouldn’t Google “Best restaurants Washington” but instead “Washington best cauliflower dish” if one wants to escape the awfully ordinary, and he counsels that the best barbecue is to be found in small towns in joints that open and close early.

The narrative gets a touch repetitive at points, but if you’re a foodie with a calculator, this is your book.

AVERAGE IS OVER
by Tyler Cowen
Nonfiction

WHAT PRICE FAME?
by Tyler Cowen

THE YEAR OF EATING DANGEROUSLY
by Tom Parker Bowles
Nonfiction

THE ART OF FLAVOR
by Daniel Patterson
Newsletter sign-up