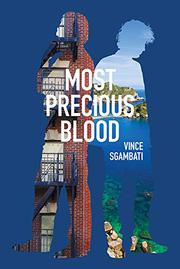 Sgambati’s debut novel, set in New York City in the mid-2000s, celebrates a father’s fierce love for his son.

Lenny Lasante had been accepted to Columbia University, but when his father suddenly died, he dutifully took over the family’s market in Queens and his dad’s role in it. He’s now a hardworking single father who desperately hopes that his own son, Frankie, will have a better life and, above all, get out of the neighborhood. Lenny’s chief worry is Big Vinny DiCico, his childhood pal who’s now a mobster. Frankie’s best friend happens to be Vinny’s son, Gennaro; in fact, they’re lovers. The narrative kicks into high gear after someone kills Gennaro; he did so to get revenge on other members of the DiCico family, who’d killed his cabdriver father. Later, Lenny makes contact with Frankie’s mother, who’d abandoned them years ago, and Frankie becomes a writer. Sgambati is a debut novelist but a much-published short story writer who’s won the Katherine Anne Porter Prize, among other awards, and his experience shows. The recurring motif of escape begins with the very first sentence, when snails—an Italian delicacy—try to sneak out of a sack in Lenny’s market; later in the book, Frankie sets them free. Dualities abound, contrasting Lenny and Big Vinny, Frankie and Gennaro, and Glenhaven in Queens and Taormina in Sicily. The past and present come poignantly alive in Frankie’s fevered dream—practically a prose poem—featuring him and Gennaro as young lovers a century ago. However, the prose isn’t all lyrical in style, as these lines delightfully testify: “Tootsie gave Mrs. Greco a puckered smile and a nod, as if she were forcing empathy through a sphincter.”

This book’s characters, and their neighborhood, will stay with readers long after they finish it.