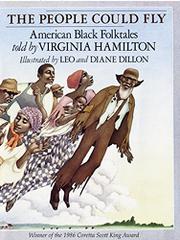 THE PEOPLE COULD FLY

It is especially noteworthy that they've combined their talents to present a collection of Black American tales--a folklore awesome in its richness, power and complexity. With all this in mind, we expect to find here nothing less than fire from the mountain. Though there is much to enjoy, and many parts are quite stirring (such as the title story), Hamilton has prepared a sampling of carefully and respectfully retold tales, not a living work of art. A surprisingly facile introduction sets a restrained tone. And her forerunner, the complex figure of Joel Chandler Harris, is unfairly assessed. From reading Hamilton, one would not get the idea that Harris took enormous pains to reproduce the tales as he heard them, even when elements of the stories were incomprehensible to him. The book is organized into four sections: animal tales, fantasy, supernatural and tales of freedom. The final one ("Carrying the Running-Aways: And Other Slave Tales of Freedom") is by far the most effective for the contemporary reader; the best of these stories convey great heroism, beauty and nobility. Less rewarding are the fantasy tales (with the exception of "Wiley, His Mama, and the Hairy Man"), and the supernatural tales (although they frequently entertain, and several would be excellent as read-alouds). The animal tales move the reader the least, and are rather lifeless. Hamilton's approximation of dialect speech is laudable for its readability. The Dillons have lent handsome black-and-white paintings to the work, but they seem posed and static. Still and all, this is a useful collection and a valuable undertaking.

Though flawed, it brings a good sampling of lore from the past to a new generation of readers. (Folktales. 8-12)

THE GIRL WHO SPUN GOLD
by Virginia Hamilton
Children

A RING OF TRICKSTERS
by Virginia Hamilton

LOVE AND THE ROCKING CHAIR
by Leo Dillon
Children

IF KIDS RAN THE WORLD
by Diane Dillon
Children

THE GOBLIN AND THE EMPTY CHAIR
by Mem Fox
Children