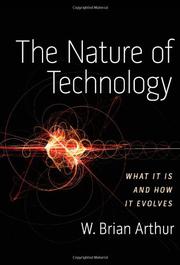 THE NATURE OF TECHNOLOGY

What It Is and How It Evolves
by W. Brian Arthur
BUY NOW FROM
AMAZON
BARNES & NOBLE
LOCAL BOOKSELLER
GET WEEKLY BOOK RECOMMENDATIONS:

A scholarly inquiry into the origin, structure and evolution of technology.

Arthur (Technology/Santa Fe Institute; Increasing Returns and Path Dependence in the Economy, 1994) begins by dismissing the traditional definition of technology as “applied science.” He points out that science barely entered daily existence until the 19th century, so achievements from the stone axe to the telescope to the steam engine represent an irrepressible human penchant for inventing tools and then experimenting to make them better. Arthur doesn’t object to experts who take for granted that technology evolves, but he wonders how to classify developments such as the laser, jet engine or radar, which, unlike biological species, are not improved versions of earlier objects. A thinker who aims to understand technology at its deepest level, the author defines it as a process of orchestrating phenomena (electricity, chemistry, quantum effects) to achieve a purpose (transportation, measurement, reproduction). Every technological development has its origin in a cluster of elements called domains—“any cluster of components drawn from in order to form devices or methods, along with its collection of practices and knowledge, its rules of combination, and its associated way of thinking.” As this definition illustrates, Arthur seeks to break down his field of study into its essential elements and then examine each to attain a profound understanding. Readers with a philosophical inclination or a background in technology may absorb Arthur’s insights, but the audience is limited.

THE OBJECTS THAT POWER THE GLOBAL ECONOMY
by Quartz
Nonfiction