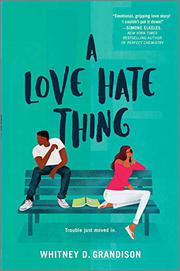 A teen from a rough neighborhood is taken in by a wealthy family and falls for their daughter.

Six months ago, 17-year-old Trice’s abusive father shot him, killed his mother, and then committed suicide. Trice was left in the care of his grandfather, but when he dies, his former employers, the Smith family, became Trice’s legal guardians. Trice moves from Lindenwood, where he was secretly involved in a car theft ring, to the affluent Pacific Hills, getting a fresh start. Although Trice and the Smiths’ popular teen daughter, Nandy, used to be childhood playmates, when he moves in she’s rude because she thinks he is going to ruin her summer. They spend the summer fighting, although their mutual attraction is almost immediate. Debut author Grandison returns to the emotional fallout from the death of Trice’s family and his new beginning ad nauseum, testing the patience of readers. Fans of the TV show The O.C. and author Simone Elkeles’ Perfect Chemistry trilogy will recognize both the characters and plot. Nandy and Trice are black, and while there is a multicultural cast of supporting characters, including Nandy’s brother who was adopted from Thailand, they are not well developed and their issues feel generic. The final drama that brings Trice back to Lindenwood is hard to believe, but the wrap-up is exactly what readers will want.