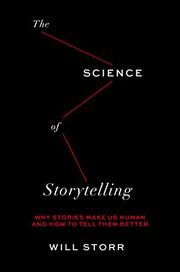 THE SCIENCE OF STORYTELLING

Why Stories Make Us Human and How To Tell Them Better
by Will Storr
BUY NOW FROM
AMAZON
BARNES & NOBLE
LOCAL BOOKSELLER
GET WEEKLY BOOK RECOMMENDATIONS:

British novelist and science journalist Storr (Selfie: How We Became So Self-Obsessed and What It’s Doing to Us, 2018, etc.) peels back the neuroscience of what makes stories work.

A good story—Alice’s Adventures in Wonderland, say, or Dracula—operates on rules that its makers may have internalized but may not be able to enumerate. One is that the creator of a story builds a model world that readers then colonize and rebuild. In one study, subjects “watched” stories as they were being related by casting their eyes upward when events occurred above the line of horizon, and “when they heard ‘downward’ stories, that’s where their eyes went too.” Tracking saccades when stories land on a person is one thing, but there are fundamental observations that storytellers have long known: Character is more important than plot, for instance, and, as Storr puts it, “every story you’ll ever hear amounts to ‘something changed.’ ” A skillful storyteller will then build the promise of change close to the beginning, as with E.B. White’s opening to Charlotte’s Web: “Where’s Papa going with that ax?” Humans being self-centered if social critters, another fundamental element is that we all like to be the hero of our own epics—our lives, that is—which helps explain our attraction to other such heroes and the journeys they face, which involve at least a couple of failures before getting it right. Moreover, we like the vicarious experience of chaos while yearning for stability in our own lives, which explains the value of a good tale full of reversals. As for that old rule about avoiding clichés like the plague? It turns out that the brain doesn’t fire quite so blazingly when it hears a familiar phrase as when it hears a fresh new metaphor, reason enough for the careful writer to try to find a new way of turning a phrase.

Both veteran and budding storytellers will learn a great deal from Storr’s pages, which themselves add up to a meaty yarn.


MORE BY WILL STORR

SELFIE
by Will Storr
Nonfiction

THE UNPERSUADABLES
by Will Storr
Fiction