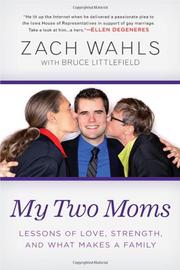 With the assistance of Littlefield (co-author: The Truth Advantage: The 7 Keys to a Happy and Fulfilling Life, 2011, etc.), Wahls writes about growing up as the son of gay parents in the heartland.

In January 2011, the author, then a student at the University of Iowa, testified before the Iowa House Judiciary Committee as they considered a state constitutional amendment to ban same-sex marriage. In a short speech, Wahls talked about being raised by two lesbians and how his childhood was no different than those of children raised by heterosexual couples. The speech was aimed at dismantling the myth that kids are damaged by having gay parents, and it was effective: The YouTube video of the speech was viewed more than 18 million times, and Wahls appeared on national TV talk shows, including The Ellen DeGeneres Show. Here the author expands on his speech, discussing the values that his parents helped to instill in him, naming chapters after aspects of the Boy Scout law: “Trustworthy,” “Courteous,” “Reverent.” (Wahls takes pride in his scouting experience, repeatedly mentioning that he is an Eagle Scout, but he disagrees with the Boy Scouts of America’s official policy banning gays from leadership positions.) Some of the author’s stories are quite moving—particularly those addressing his mother Terry’s multiple sclerosis—but many of Wahls’ epiphanies are unsurprising: “We are more alike than we are different”; “hate has no hope of ever erasing hate”; etc. The book works best when there's more levity amidst the earnestness, as when the author humorously answers questions he’s asked most frequently (e.g., “Which one of your moms is the man?”). Few minds will be changed by this book—it seems unlikely that a homophobe would read something titled My Two Moms—but Wahls’ heart is in the right place.

A sincere first effort that aims to chip away at stereotypes surrounding same-sex parents.

THE 10 HABITS OF HAPPY MOTHERS
by Meg Meeker
Nonfiction

DISPATCHES FROM A NOT-SO-PERFECT LIFE
by Faulkner Fox
Nonfiction