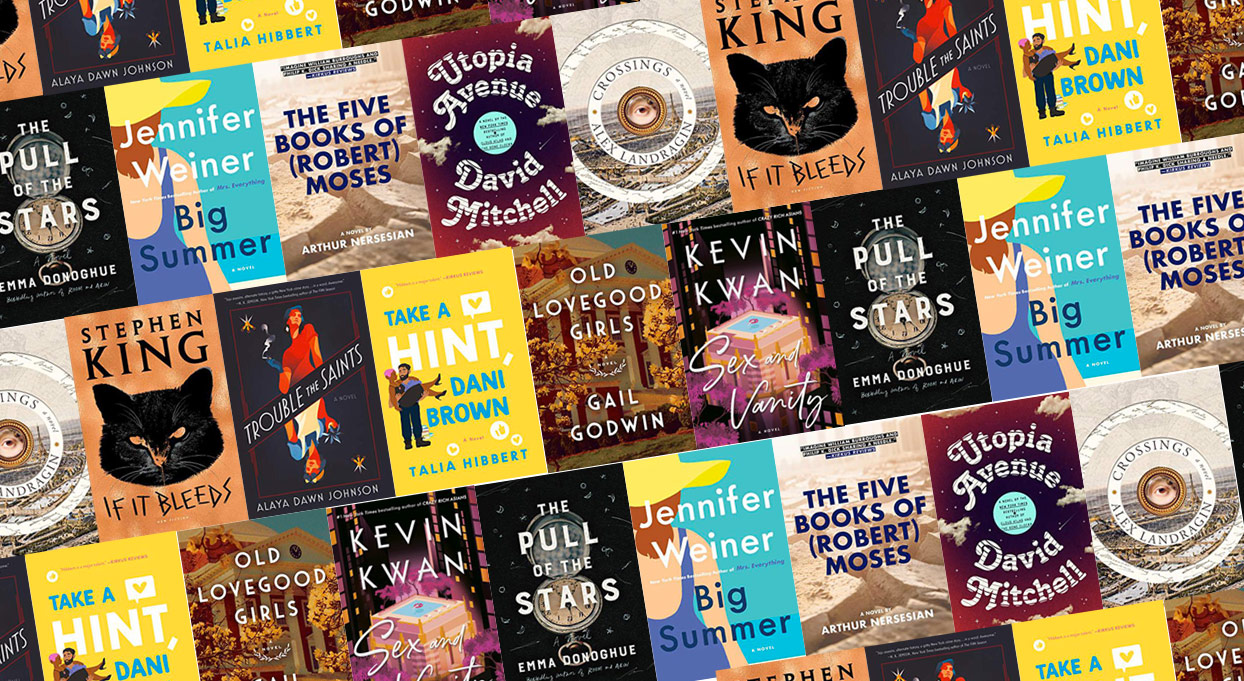 The Pull of the Stars by Emma Donoghue (Little, Brown, July 21): Donoghue has either the best or worst timing as she releases a novel set during the 1918 flu pandemic in a Dublin hospital’s maternity ward. Our review says it’s “her best novel since Room.”

Old Lovegood Girls by Gail Godwin (Bloomsbury, May 5): Our review called it “intelligent, reflective, satisfying fiction from an old master”: Godwin’s 16th novel follows the half century of friendship between two very different women who rarely meet in person over the decades after spending one semester as college roommates.

Take a Hint, Dani Brown by Talia Hibbert (Avon, June 23): Last summer, Hibbert made a splash with Get a Life, Chloe Brown. Now Chloe’s sister Dani, a pink-haired Ph.D. student, gets her turn at a hot, funny romance.

Trouble the Saints by Alaya Dawn Johnson (Tor, July 21): In Johnson’s first novel for adults, set in World War II–era New York, there’s magic in the hands of some people of color: the ability to sense threats, to read cards, to wield knives.

If It Bleeds by Stephen King (Scribner, April 20): You probably don’t need to be reminded to read Stephen King, but just in case…our review called this collection of four chilling novellas “vintage King: a pleasure for his many fans and not a bad place to start if you’re new to him.”

Sex and Vanity by Kevin Kwan (Doubleday, June 30): Kwan returns with his first novel since Crazy Rich Asians hit the movie theaters, this time setting the story in Capri and the Hamptons—classic summer locales. “While he’s engineering the timeless love story and continuing our postgraduate education in all the things money can buy, Kwan manages to take a few swipes against snobbery and racism. Nice.”

Crossings by Alix Landragin (St. Martin’s, July 28): The narrator of this novel’s preface is a bookbinder, and the rest of the book consists of three manuscripts that have been placed in his professional care. Each has a different author, but somehow they’re linked. You can read them straight through or by interleaving the chapters. “Romance, mystery, history, and magical invention dance across centuries in an impressive debut,” according to our review.

Utopia Avenue by David Mitchell (Random House, July 14): Taking a break from busting genres and the space/time continuum, Mitchell returns with a straight-up rock ’n’ roll novel set in the late 1960s—though the guitarist does turn out to be a descendant of Mitchell’s earlier hero Jacob de Zoet.

The Five Books of (Robert) Moses by Arthur Nersesian (Akashic, July 28): If you’ve used your time sheltering in place to finally finish The Power Broker, you might want to move on to this novel, which is almost as long. Our review calls it “a postmodern masterwork that outdoes Pynchon in eccentricity—and electricity, with all its dazzling prose.”

Big Summer by Jennifer Weiner (Atria, May 5): This novel might as well have been called Take Me to the Beach! Most of us won’t be traveling this summer, but we can follow Weiner’s heroine, Daphne, to her best frenemy’s Cape Cod wedding, where she finds herself caught up in a murder mystery.