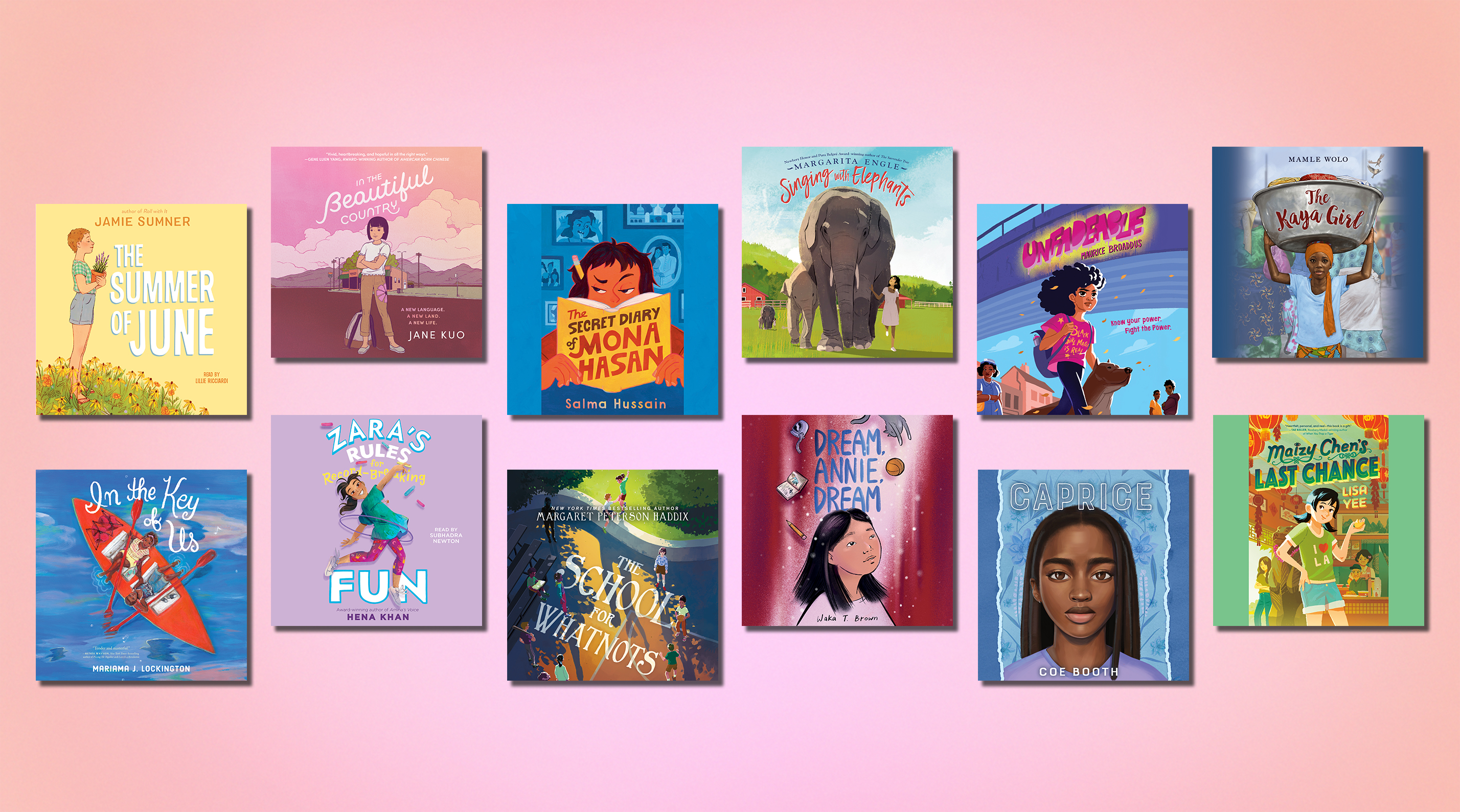 Audiobooks continue to surge in popularity for good reason. A strong narrator can elevate a book through their skillful reading, adding texture through regional accents or the way they infuse emotion into their deliveries. Many audiobook aficionados have favorite narrators and seek out their next books on the basis of who reads them. Below are some great middle-grade titles out this year that are equally successful in print and audio. In keeping with the broad developmental and age ranges covered by this category, their audiences range from early elementary through early high school. Many would be ideal for family listening and discussion.

The School for Whatnots by Margaret Peterson Haddix, narrated by Lillie Ricciardi (Harper Audio, 6 hours and 12 minutes): Kids discover they are pawns in an elaborate, exploitative ruse created by a shadowy corporation and grapple with their own parents’ roles within it.

Zara’s Rules for Record-Breaking Fun by Hena Khan, narrated by Subhadra Newton (Simon & Schuster Audio, 2 hours and 7 minutes): A 10-year-old’s social circle is upended when a new family moves into the neighborhood and friendship dynamics shift. Will her plan to make everything right succeed?

In the Key of Us by Mariama J. Lockington, narrated by Yinka Ladeinde and Imani Jade Powers (Listening Library, 8 hours and 2 minutes): Music camp plus two Black girls from very different walks of life makes for a memorable summer of growth, vulnerability, connection, and giving voice to your truths.

The Secret Diary of Mona Hasan by Salma Hussain, narrated by Asia Mattu (Tundra Books, 7 hours and 36 minutes): Teachers, friends, relatives in Pakistan, a move from Dubai to Nova Scotia: Nothing escapes Mona’s observant eye, and it’s all immortalized in her hysterically funny diary entries.

Caprice by Coe Booth, narrated by Bahni Turpin (OrangeSky Audio, 7 hours and 17 minutes): Caprice wrestles with whether to accept a private school scholarship and leave behind her close-knit Newark neighborhood; she’s also haunted by the legacy of childhood sexual abuse.

Singing With Elephants by Margarita Engle, narrated by Carla Corvo (Listening Library, 2 hours and 21 minutes): A Cuban American immigrant girl in 1940s California bonds with her elderly neighbor, Chilean poet Gabriela Mistral, and works to reunite a baby elephant with its family.

The Summer of June by Jamie Sumner, narrated by Lillie Ricciardi (Simon & Schuster Audio, 4 hours and 36 minutes): Extreme anxiety casts a shadow over every part of June’s life, but this is the summer when she stops letting her fears hold her back.

In the Beautiful Country by Jane Kuo, narrated by Sura Siu (HarperAudio, 2 hours and 45 minutes): Moving from Taiwan to America in 1980 was supposed to make Ai Shi the lucky one, but their new life brings more challenges than they ever imagined.

The Kaya Girl by Mamle Wolo, narrated by Ekua Ekeme (Hachette Audio, 6 hours and 49 minutes): Ghanaian 14-year-olds Abena and Faiza cross paths in a market and form a fast friendship that bridges a multitude of differences, enriching each other’s lives.