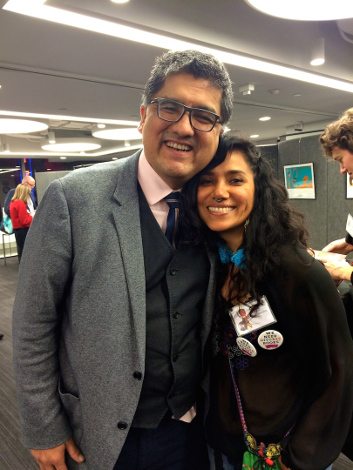 Yuyi Morales is a celebrated illustrator and writer of picture books known for her vibrant, lush, and bold images. Morales decided to stop illustrating picture books by other writers until Sherman Alexie wrote Thunder Boy Jr., a captivating story about a young Native American boy who doesn’t like the name he’s given: Little Thunder (his father’s nickname is Big Thunder). Nervous about telling his father he doesn’t like his name, the boy strikes up enough confidence to tell his father about his feelings. “Morales’ animated mixed-media illustrations…masterfully use color and perspective to help readers see the world from Little Thunder’s point of view,” our reviewer writes. We asked Morales over email to tell us how she approached this book, and why she took it on (Alexie was unavailable for interview).

Could you tell us about the decision to use the colors and textures from the remains of your house in Mexico and what those materials have to do with Thunder Boy Jr.’s search for identity in this book?

The manuscript to illustrate Thunder Boy Jr. arrived just as I had moved back to my hometown of Xalapa, Mexico, after 20 years of living, working, and raising my son in California. When I first immigrated to the U.S. in 1994, I had gone through a deep search of who I was (with a new baby in my arms) and what my path would be in a new country. As I returned to Mexico after living almost half on my life in the U.S., I had many new questions again: who was I now, 20 years later, as I returned to my place of birth? I was very happy to accept illustrating Thunder Boy Jr. But at the moment, I was also in the process of finding a new place to live and also make my books. I had just found a property with an abandoned, decaying house that needed intensive repair. Getting the house back to life would allow me to have my studio where I could create the illustrations for Thunder Boy Jr. However, the property was in such a state that many walls and all the wooden ceilings needed to be demolished and rebuilt. As bricks, clay tiles, and very old wood began to come down, I realized how beautiful and irreplaceable these materials were. The bricks were handmade and crafted by Mexican people with centuries-old techniques, and the wood had amazing colorations and textures given by weather and time. Soon I decided that I would rebuild the house and my studio reutilizing the demolished material, and I also decided I would scan colors and textures from the wood and the bricks to illustrate the story of Thunder Boy Jr. The process was amazing. Both my new home and Thunder Boy Jr. were being built from the pieces of a house that had been built there more than 100 years ago. Illustrating Thunder Boy Jr. became a process of understanding who we are by recognizing our strengths, as much as honoring the beauty of our foundations and the legacy and teachings of those who have been there before us. Our stories are built now, but they began a long time ago.

Since you are also a writer, how do you decide whether to take on a book written by someone else and why did you say yes to this one?

Indeed, for years I haven’t accepted offers to illustrate books for other writers, because I very much want to concentrate in creating my own stories; but when I received the manuscript for Thunder Boy Jr., the joy I felt to be able to work with a writer like Sherman Alexie, whose work I admire so much, made me reconsider the opportunity. Then I read the manuscript. The way Sherman had written Thunder Boy Jr. was such that I knew I could do much more than just create illustrations for his story. In fact, I could also make it my story. Once I was positive that the story could also have my voice, I was finally able to say yes.

What kind of research did you do to incorporate Native American iconography in the book?

I actually felt as if my research was and might never be finished. Thunder Boy Jr. opened a continuous learning of what it means to get a glimpse into a different culture from mine. I am a big lover of traditional stories and folk tales, and that is where I began my research, as I tend to do for all my books. Legends and folktales often help to inspire me; they incite me to utilize certain colors, or to imagine the

composition of an image. In the case of Thunder Boy Jr. I went paragraph by paragraph researching every concept new to me. For instance, what is a grass dancer? How are names given among certain native groups? When I decided to tell the narrative from a family point of view, I wanted to know more about how Native American families might be similar and different from my family. It is obvious that there is so much that I will never know, so I also asked questions to be directed to Sherman about my depiction of his story and his culture. I am Mexican, born and raised in a mestizo family, with my paternal grandfather being a Mixtec Indian from the the mountains of Oaxaca, but I was born only months after he passed away. I could never attempt to recreate stories, symbols, or art from a culture that I have not lived. My knowledge will forever be absolutely incomplete and from the outside. So, instead, in the making of this book, I wanted to bring in my own culture to find a common ground with Sherman’s, so we could tell the story together. If there is something I am always researching and learning, it is how to honor and respect my own culture as well as the cultures of other people.

Claiborne Smith is the editor in chief.