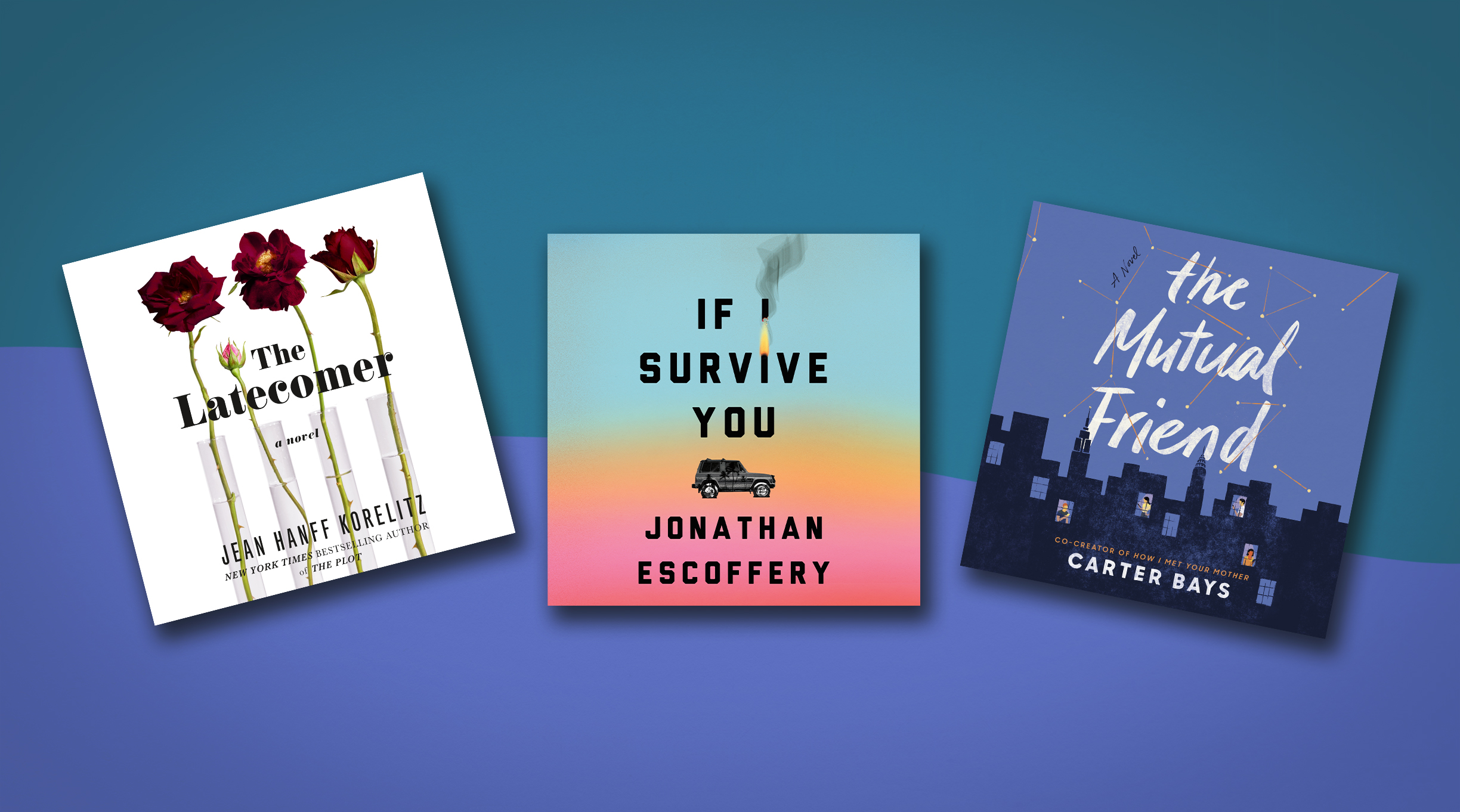 Jean Hanff Korelitz has a wonderfully sneaky way of unfolding plot, as many learned from her 2021 bestseller, The Plot. In her newest, The Latecomer (Macmillan Audio, 16 hours and 19 minutes), which our reviewer called a “satisfyingly twisty” story of triplets who hate each other from birth and the unhappy parents who brought them into this vale of tears, that sneakiness has an added element, which is: Who the heck is telling this story? They sure do seem to know everybody’s secrets and woes. Yet as Julia Whelan’s chatty, personable reading underlines, this narrator is a character in his or her own right.

The dramedy begins with tragedy: While on a double date as an undergrad at Cornell, Salo Oppenheimer flips his Jeep, killing his fiance, his best friend, and any prospects for future contentment. He marries a woman he meets at the funeral; their extended, etiolating attempts to produce offspring are finally rewarded with some of the most miserable siblings who ever lived. As unhappy families go, these uppercrust Oppenheimers are definitely in the top 1%. But believe it or not, Korelitz—through the machinations of her mystery narrator—has a plan to lift them out of their misery.

A first-person narrator with a concealed identity is also featured in Carter Bays’ The Mutual Friend (Penguin Audio, 15 hours and 56 minutes), the author’s fiction debut after co-creating the TV show How I Met Your Mother. George Newbern’s reading of the story—his delivery recalls the arch, plummy tones of a 1960s game show host—is even more perfect when you finally find out whose voice it is in the audiobook’s final minutes.

The “mutual friend” of the novel’s title is the smartphone, which plays a key role in almost every scene in a way so true to life it hurts. Among the many characters connected by this little friend are Alice, a 28-year-old nanny who has been trying to get it together to take the MCAT and apply to med school ever since announcing it on Facebook two years ago; her crazy new roommate, Roxy, a social media maniac and sexy troublemaker who works in the New York City mayor’s office; Alice’s brother, Bill, a tech zillionaire, and his wife, Pitterpat. As funny as The Mutual Friend is, it is also, as our reviewer wrote, full of wisdom and compassion,“original, intelligent” and “beautifully written.”

If I Survive You, the debut of rising star Jonathan Escoffery (Macmillan Audio, 8 hours and 45 minutes), is read by Torian Brackett, whose voice is the ideal instrument for this dazzling collection of linked stories, moving fluidly in and out of Jamaican patois, using first-, second-, and third-person narration to show different angles on brothers Delano and Trelawny, their cousin Cukie, their families, their schoolmates, their employers, and their girlfriends. These Miami-born sons of Jamaican immigrants come of age in a world striated by racism, sucked dry by capitalism, and flattened by Hurricane Andrew yet lit up by “humor, savvy and a rich sense of place,” according to our review.

The first story, “In Flux” establishes the unending ironies of identity politics as the main topic of Trelawny’s primary, secondary, college and post-institutional education. What is he? people demand to know. The answer changes depending on whether he’s in Miami, where no matter what he says they are sure he’s Dominican; in the Midwest, where he is “simply, unquestionably Black”; or in Jamaica, where despite the assertion that “there’s no racism here,” the police “only shoot you if you’re black-Black.” By the last story, all his education, family dysfunction, trauma, and a long string of (extremely odd) odd jobs culminate with a short stay in the city jail—and a vision of the way forward for his family.