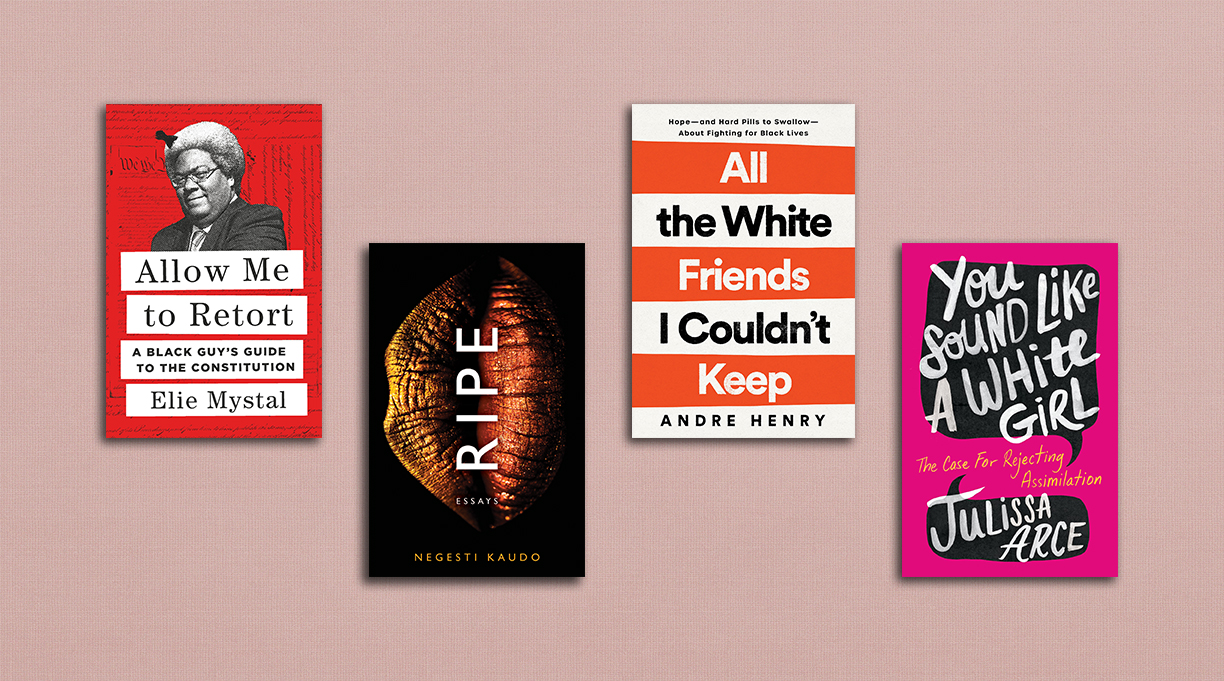 Book banning in the U.S. is reaching epidemic proportions. Not only is the notion of banning (or worse, burning) books an assault on an author’s freedom of expression; it’s also detrimental to anyone’s ability to fully understand history and culture and to avoid the mistakes of the past. In addition to books addressing LGBTQ+ issues, the most targeted works are those that consider immigrants, marginalized ethnicities, non-Christians, or Black lives in America—seemingly any viewpoint that challenges Whiteness as the default norm. Regarding the latter, I recommend four spring books that tackle those issues head-on and provide vital perspectives to lead us toward a more equitable society. Buy them; read them; celebrate them. (All quotes come from the Kirkus reviews.)

Allow Me To Retort: A Black Guy’s Guide to the Constitution by Elie Mystal (The New Press, March 1): “Mystal, an analyst at MSNBC and legal editor for the Nation, reads the Constitution from the point of view of a Black man keenly aware of the document’s origins in a slaveholding nation.…As the author abundantly demonstrates, people of color and women have always been afterthoughts, and recent conservative applications of constitutional doctrine have been meant to further suppress the rights of those groups.…It’s eminently clear that the author knows his constitutional law and history inside and out. There’s something to learn on every page. A reading of the Constitution that all social justice advocates should study.”

You Sound Like a White Girl: The Case for Rejecting Assimilation by Julissa Arce (Flatiron Books, March 22): “At age 14, Arce was an undocumented Mexican immigrant whose parents ‘ate American exceptionalism like it was holy communion on Sunday’.…As an adult, the author became an American citizen and landed a coveted job at Goldman Sachs.…Yet her journey is not an illustration of meritocracy. Rather, Arce exposes the idea of the American dream as mendacious propaganda and shows the deep harm it causes to people of color, including immigrants, who are urged to chase Whiteness as a pathway to success.…Arce celebrates the Mexican American immigrant experience in all its vibrancy and nuance while fearlessly naming the pain inflicted by American racism, ethnocentrism, and xenophobia.”

All the White Friends I Couldn’t Keep: Hope—and Hard Pills To Swallow—About Fighting for Black Lives by Andre Henry (Convergent/Crown, March 22): “A powerful examination of White assumptions about Black people and the obstacles that stand in the way of social justice.…Henry demonstrates how White people can be allies, first by not declaring themselves to be so but instead awaiting acknowledgment of that status by Black people. He also encourages a kind of separatism. ‘Black people may need to rethink the fight for the proverbial seat at the table in white institutions,’ he writes. ‘We need tables of our own’.…Wise, essential instruction for all who seek redress for the inequalities that persist in America.”

Ripe: Essays by Negesti Kaudo (Mad Creek/Ohio State Univ., April 18): “With unflinching honesty and vulnerability, Kaudo documents her journey to becoming her bolder self, to fight ‘the active erasure happening to blackness and black people’ and the racist double standards and brutality of this nation.…Kaudo is a highly self-aware work in progress who doesn’t have all the answers, but she has chosen the most interesting questions to grapple with. The result is a deeply intimate meditation on millennial Black womanhood and a righteous indictment of how this country treats Black girls and women.”