5 Children’s Novels for Fantasy Lovers of Any Age 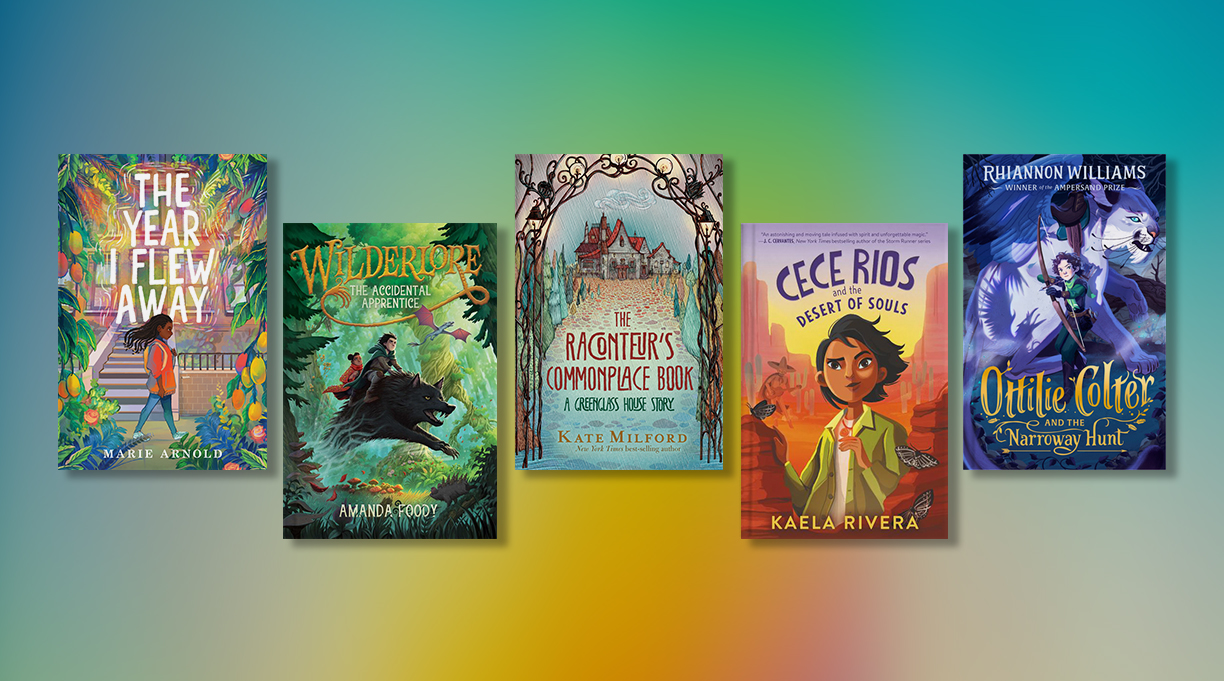 I have some time off this month, and with no exciting travel in the offing, I’m planning on spending it catching up on some reading. But it’s still time off, so I’m lining up books that feel as little like work as possible: middle-grade fantasy. Those are the stories that made me a reader, and they are still the ones that can recharge my reading soul. This spring has a bundle, ranging from magical adventure in the real world to wholly built-world fantasy, satisfying lots of different fantasy itches.

In Marie Arnold’s The Year I Flew Away (Versify/HMH, Feb. 2), Gabrielle Marie Jean must leave Haiti and her parents behind and go alone to live with her uncle, aunt, and cousins in New York. Acutely aware of the difference between her and her classmates, she makes a terrible bargain with the witch Lady Lydia in hopes of instantly fitting in. Of course, it does not go well, but with the help of friends—one a human, the other a talking rat—maybe she can repair the damage. “A fantastical take on immigrant narratives” (as our review said) and a talking rat? Count me in.

Kate Milford takes readers back to an earlier version of the world of Greenglass House (2014) and its companions withThe Raconteur’s Commonplace Book (Clarion, Feb. 23). I’m a series fan, so I’m not surprised to learn that Milford gives her readers “rich complex language [that] hints of magic and connection, of interwoven fates and tragedies.” This is not a straight novel but rather a framed collection of stories along the lines of The Decameron, with a diverse assemblage of travelers trapped by weather in the inn that will become the Greenglass House, exchanging tales that come together like a puzzle. I can’t wait.

Girl power is at the heart of Australian trilogy opener Ottilie Colter and the Narroway Hunt (Little Hare/Trafalgar, March 1) by Rhiannon Williams. It’s got a classic setup: two children living in poverty in the Swamp Hollows. When Ottilie’s younger brother goes missing in a rash of boys being abducted, she disguises herself as a boy in order to find him. It turns out they’ve been taken to participate in the titular hunt, guarding the kingdom’s borders from monsters—a necessary task, Ottilie learns, but one girls cannot take part in. (Ottilie's pale; her brother is darker.) Our review concludes: “a must-read for fans of the genre.” Nuff said.

In Amanda Foody’sThe Accidental Apprentice (McElderry, March 30), set in the aptly named town of Dullshire, an apprentice mushroom farmer named Barclay toils, orphaned years earlier by a Beast attack. When he accidentally bonds with another Beast, his place in Dullshire is threatened, as locals revile the Beasts and the human Lore Keepers who befriend with them. Pale-skinned Barclay’s world is a naturally diverse one. According to our review, “the worldbuilding calls forth the atmosphere of classic fantasy worlds while invoking fun and whimsy every step of the way.” Exactly what I need.

Feared creatures—or, rather, criaturas—also figure in Kaela Rivera’s Cece Rios and the Desert of Souls (Harper/HarperCollins, April 13). They are feared by the inhabitants of Tierra del Sol, but when she was 7, Cece befriended a kindly one. Five years later, however, an evil one steals her sister, and Cece sets her sights on rescuing her when everyone else gives up. To do so, though, she’ll have to enter the Bruja Fights. “With strong ties to Mesoamerican lore and culture,” writes our reviewer, “the story hits the sweet spot between dark and light.” Sounds great, doesn’t it?

It’ll be a fabulous week.