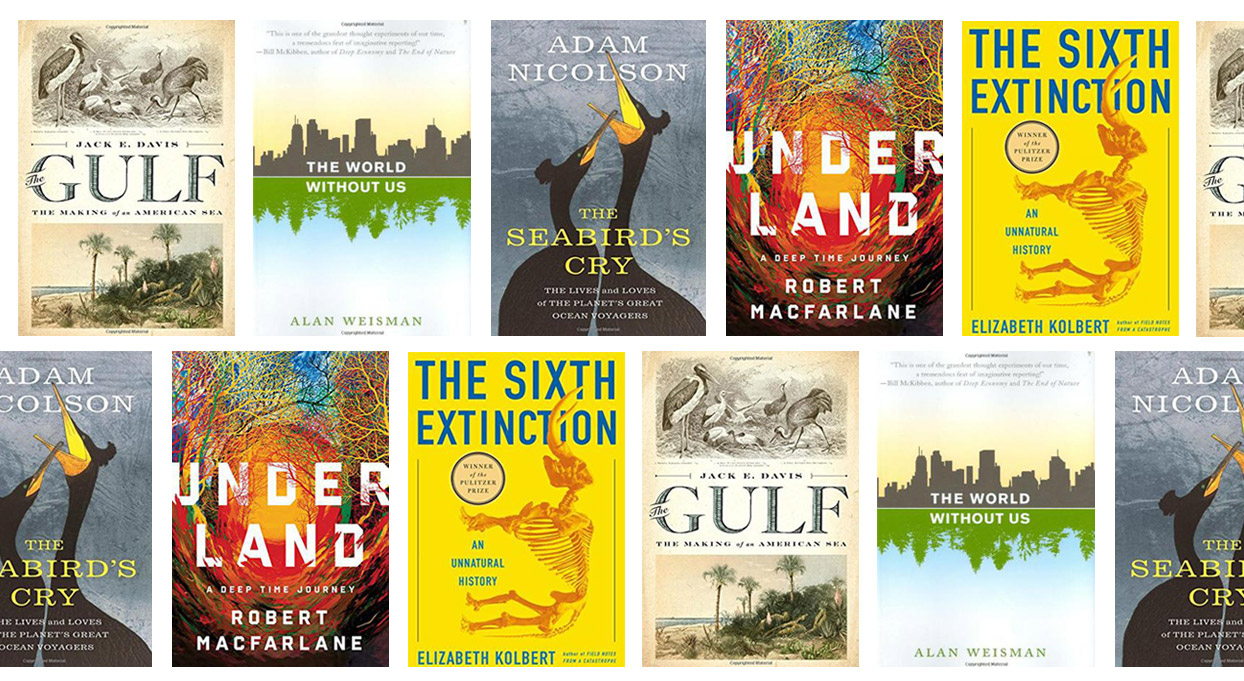 Marking this year’s Earth Day has never seemed more necessary, as evidence mounts that climate change is altering the world’s weather and as the rate of mass extinctions accelerates. Here are five classic works of environmental history that go beyond today’s headlines.

The Gulf: The Making of An American Sea by Jack E. Davis (Liveright/Norton, 2017). This Kirkus Prize– and Pulitzer Prize–winner tells the story of the Gulf of Mexico, from its birth in prehistory to its struggle to survive the age of petrochemicals. Davis, professor of history at the University of Florida, brings the history of the Gulf to life and examines the daunting challenges faced by those fighting to preserve an ocean that has become both a dumping ground for pesticides and industrial waste and an easy mark for developers. The New York Times called Gulf “a beautiful homage to a neglected sea.”

The Sixth Extinction by Elizabeth Kolbert (Henry Holt, 2014): This winner of the 2015 Pulitzer Prize chronicles the Earth’s cycles of species extinction, from the first five mass die-offs of plants and animals to the current human-induced catastrophe as development, technology, and population increases wreak havoc on the natural world. Kolbert is a superb reporter and writer with a one-two punch. First, she enthralls you with stories of the Earth’s natural wonders (the Panamanian golden frog, the great auk, the Sumatran rhino). Then she lets the bad news rip: Humanity’s will to explore and exploit has driven these creatures to the abyss, and the pace of mass die-offs will accelerate as the Earth warms. Drawing on the work of researchers from many different countries, this is an essential book for understanding the stakes in the struggle to contain the worst excesses of human progress.

Underland: A Deep Time Journey by Robert Macfarlane (Norton, 2019): Macfarlane’s latest examines the health of the Earth by going deep beneath its surface. He tells stories of caves and catacombs and subterranean rivers, the creatures at home underground, and the white-knuckle adventures of humans who penetrate the world’s deepest caves. Not even the underground is safe from human despoliation; the author visits a “tomb” for radioactive nuclear waste in southwest Finland and documents how global warming is changing Greenland’s underground, as things long buried in the frozen Earth (such as toxic waste from an American cold war missile base) return to the surface. Underland is a plangent testament to some of the world’s seldom seen wonders.

The Seabird’s Cry: The Lives and Loves of the Planet’s Great Ocean Voyagers by Adam Nicolson (Henry Holt, 2018): This book is a bittersweet work of natural history, the story of 10 different species of seabirds. Infused with a sense of wonder and a sturdy grasp of science, Nicolson writes of puffins and albatrosses, fulmars and gulls, guillemots and gannets, documenting their bloodthirsty competitiveness, their astounding feats of survival, and their magnificent powers of flight. These once-abundant seabirds are now threatened by human plundering of their nesting and fishing grounds and by the impact of climate change on their migratory routes. If this book doesn’t move you toward a sense of urgency about global warming, I’m not sure what will.

The World Without Us by Alan Weisman (Dunne/St. Martin’s, 2007): Weisman pulls off an amazing feat of intellectual topsy-turvydom—he demonstrates humanity’s impact on the Earth by imagining it in our absence. What would happen if we vanished tomorrow? Weisman explores everything from the dark fate of Manhattan (the subways would flood and skyscrapers would topple, for starters) to the weird flourishing of wildlife in the world’s demilitarized zones—when humans vacate a place, other creatures quickly reassert themselves. Though its premise is apocalyptic, The World Without Us shows how nature, liberated from our presence, would bounce back. Critic Lev Grossman called Weisman’s book“brilliant, morbid, richly informative, and grandly entertaining.”

Mary Ann Gwinn is a Pulitzer Prize–winning journalist in Seattle who writes about books and authors for several publications.