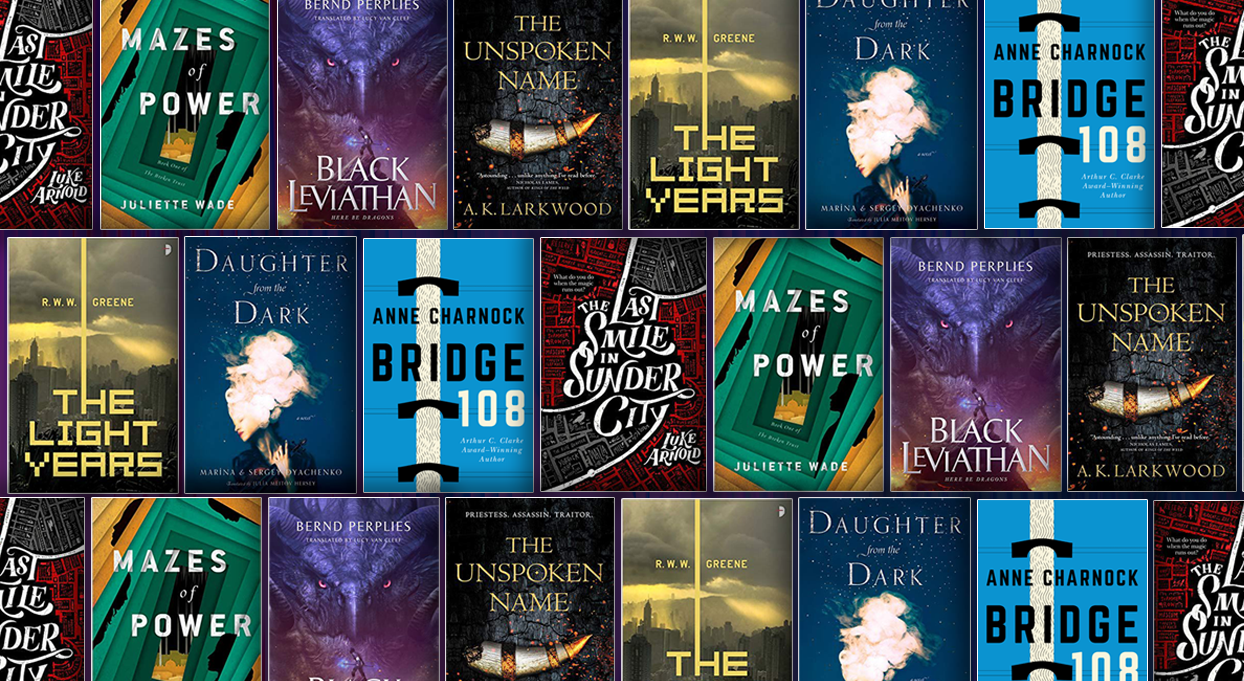 Hundreds of new science fiction and fantasy books are published every month. Finding the cream of the crop could be a chore, but here’s a handy guide steering you toward the best releases.

WHAT IT’S ABOUT: A millennia-old cavern city is the setting for this complex drama in which 12 noble families compete for control of the throne in a stratified society. When the current ruler succumbs to fever, Tagaret is chosen to represent his family, not only to secure its future but also to save his mother from his abusive father, and to marry the girl he loves. The other families aren’t the only thing standing in his way—Tagaret also has to contend with his sociopathic younger brother.

WHY YOU MIGHT LIKE IT: Hailed for its inventive world building and political intrigue, Mazes of Power is a certified page-turner.

Daughter From the Dark by Marina Dyachenko and Sergey Dyachenko (Harper Voyager, Feb. 11)

WHAT IT’S ABOUT: Playboy and nighttime DJ Alexey Grimalsky’s life is upended when he rescues 10-year-old Alyona from some bullies. Alyona, who might be Alexey’s long-lost daughter, insists on staying with him while she searches for her missing brother. Attempts to get rid of her are complicated by a dangerous monster disguised as a plush teddy bear, but Alyona promises Alexey that when she finds her brother, they will both leave this realm forever. The novel is translated by Julia Meitov Hersey.

WHY YOU MIGHT LIKE IT: The authors wowed the reading community with 2018’s Vita Nostra, and are poised to do so again with this fantasy, infused with subtle magic.

WHAT IT’S ABOUT: In the far future, a spaceship captain agrees to an arranged marriage between her daughter, Hisako Saski, and Adem Sadiq, a maintenance engineer who works aboard his family’s sub-light starship. Hisako does not like that her future has been chosen for her, nor does she like being forced to study obsolete technology. But Hisako’s and Adem’s personal issues must take a backseat to a discovery that could lead to faster-than-light travel.

WHY YOU MIGHT LIKE IT: On the surface, you get an engrossing space opera, but if you look deeper you will find explorations of poverty, arranged marriage, and the toll that difficult moral choices take on families.

WHAT IT’S ABOUT: In this epic fantasy adventure, Csorwe , a tusked priestess, is destined to be sacrificed to appease the gods. On the day she is destined to die, a wizard named Sethennai offers her an alternative: defy her destiny by leaving with him and becoming his assassin. Sethennai needs Csorwe to help him reclaim what was taken by a devious rival, but Csorwe’s decision to defy the gods does not come without costs.

WHY YOU MIGHT LIKE IT: Larkwood’s exciting debut allows you to get in on the ground floor of The Serpent Gates fantasy series.

WHAT IT’S ABOUT: This dystopian novel of oppression is set in the late 21st century. Young Caleb, separated from his mother as they escape the climate-ravaged lands of southern Europe, falls prey to traffickers, and becomes a slave. Despite his hardships, Caleb never loses hope of attaining a better life. With the help of a fellow slave, Caleb manages to escape, but finds life is harder than he could have ever imagined.

WHY YOU MIGHT LIKE IT: This coming-of-age story, told through a mosaic of voices, is enjoyable for readers young and old alike.

WHAT IT’S ABOUT: Sunder City is a place where magic is no longer present, but supernatural monsters remain. Fetch Phillips, a former soldier, is a human private investigator who only takes on nonhuman clients. His latest job begins as a missing persons case in which Fetch is hired to find a 300-year-old Vampire. It shouldn’t be too hard; all of the supernatural monsters have been slowly dying since the magic disappeared. However, Fetch’s investigation leads to a conspiracy.

WHY YOU MIGHT LIKE IT: Author Arnold, who played John Silver in the Emmy-winning show Black Sails, perfectly captures the voice of the noir detective.

WHAT IT’S ABOUT: An epic tale of revenge plays out in an imaginative fantasy world. The residents of the coastal city of Skargakar make their living hunting dragons, using their parts for food and clothing. Airborne ships hunt the beasts in the white expanse of the cloud sea. When Lian, who carves the crystals that power the ships, crosses the wrong man, he is assigned to a ship as a dragon hunter. That ship’s captain is hell-bent on revenge. He aims to take down the mightiest dragon of all: the fabled Firstborn, Gargantuan.

WHY YOU MIGHT LIKE IT: The book’s elevator pitch says it all: Melville’s Moby Dick unfolds in a world of dragons.

Are you in the middle of a series? Check to see if the next book is finally here: