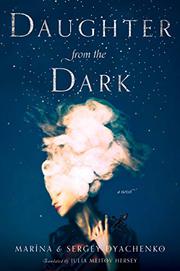 DAUGHTER FROM THE DARK

A playboy learns a life lesson from a supernatural waif in the latest fantasy from a prolific, Ukrainian-born husband-and-wife writing team.

When Alexey Igorevitch Grimalsky—DJ Aspirin to fans of his radio show and disco nights—finds a 10-year-old being menaced by bullies in a dark alley, he thinks he can rescue her, turn her over to her parents or the authorities, and go on his way. But the Dyachenkos (Vita Nostra, 2018, etc.) have other plans for their protagonist. Willful Alonya insists on staying with Aspirin, offering two different stories to account for herself. Is she Aspirin’s daughter, the product of a long-forgotten love affair? Or is she an immortal being from another plane who has come to Earth looking for her missing brother? Neither sounds especially plausible to Aspirin, but there’s evidence to back up both. A mysterious visitor produces a birth certificate listing Aspirin as Alonya’s father; and Alonya’s teddy bear comes to life when the little girl is menaced, tearing her attackers to pieces. Alonya’s brother, she explains, is an artist, but true art is impossible in their perfect home, so he has come to imperfect Earth, taken on human form, and forgotten his true self. To rescue him she must learn to play a magical tune on enchanted violin strings; when her brother hears it, he will remember himself. This reverse-Orpheus setup is intriguing, but the Dyachenkos offer only glimpses of the mythology behind it, preferring to focus on the much less interesting Aspirin. As taking care of his supernatural “daughter” increasingly interferes with Aspirin’s hard-drinking, womanizing routines, the relationship slowly (and not very convincingly) transforms him into a responsible man who’s ready for love and parenthood.

The authors bring a refreshing perspective that avoids the genre's clichés, but this is not the best example of their work.