8 Indie Books To Read This Summer 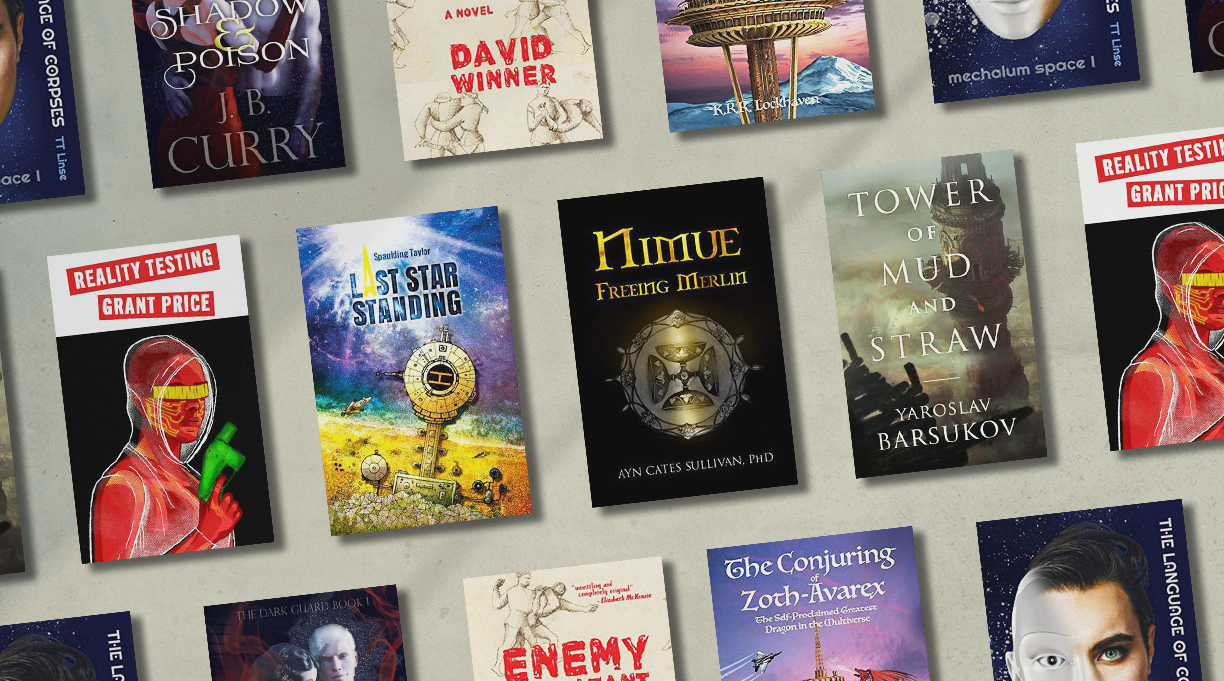 Reading a novel set in another universe and/or millennium sweetens the effects of a summertime escape. These starred SF and fantasy novels, which range from post-apocalyptic survival stories to reimagined Celtic myths, are full of androids, aliens, and intergalactic battles. A day off and any of the below titles would provide a potent cure for reality.

Set in a future Germany, Reality Testing by Grant Price teems with cyborgs and machine-enhanced humans. Identity theft takes on new meaning when a woman awakens to find herself transplanted into another body. This inventive world, where sexism, climate devastation, and capitalism have run amok, is “a bracing blast of neo-cyberpunk.”

It’s the timeless story of humans versus alien overlords in Last Star Standing. Not all the aliens are evil, though. One tiny, fuzzy “gromeline” is a smart, brave soul that helps out the humans. Our reviewer says that debut author Spaulding Taylor “tempers his bleak, post-apocalyptic fictional world with…energetic narration and darkly comic humor.”

In the complex SF novel Tower of Mud and Straw, tulips are exploding devices akin to tiny black holes, and towers are anti-airship structures. Yaroslav Barsukov’s debut earned a rave from our reviewer, who says this “marvelous SF tale about dangerous technology offers sublime stretches that will warrant revisiting.”

Sure, The Language of Corpses might not sound like a summer read, but T.T. Linse’s novel is pure escapism—a space-traveling adventure whose cast members inhabit various bodies and in which cyberhumans and immortality are the norm. “Some of the speculations here (especially concerning the nature of intelligence, biologically native or artificial) could have taught Isaac Asimov a thing or two,” notes our reviewer.

J.B. Curry’s fantasy/romance set in 1933 stars an albino Chicago private eye with an unusual power—he can disappear into and travel within shadows. His new client has her own unique skill—she can kill a man with a touch. Our reviewer calls Shadow Poison “a torrid, atmospheric fantasy that satisfies on all fronts.”

K.R.R. Lockhaven’s The Conjuring of Zoth-Avarex follows a dragon who becomes a worldwide media sensation after three apprentice magicians conjure him into reality. Our reviewer says, “Lockhaven impressively controls all of this fun from the very first page, offering an endless array of allusions to canonical fantasy literature as well as quite a few snide asides, such as a sign tacked up in one of the…labs: ‘Absolutely No Conjuring of Sparkly Vampires.’ ”

A 17-year-old Manhattanite discovers her connection to Celtic mythology on a summer trip to England in Nimue, Ayn Cates Sullivan’s YA novel. “Sullivan might have written a fantasy in which her lead throws punches while hunting for relics. Instead, she’s more faithful to Merlin’s complex mythology than to the genre’s tropes,” says our reviewer.

Enemy Combatant doesn’t meet the traditional definition of fantasy, but David Winner’s lead is living in a fantasy world; he believes that with enough righteous indignation he can right many of the world’s colossal wrongs. Our reviewer says, “The author’s subtle, intelligent characterization makes clear that however well-earned Peter’s rage against the machine is, that machine is also a convenient target that allows him to displace intolerable emotions or avoid honest self-evaluation.”