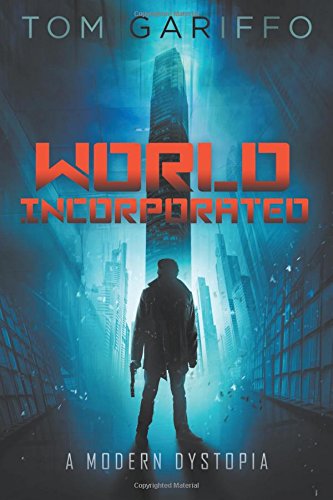 In 2012, Tom Gariffo published World, Incorporated, the dystopian novel he wrote while studying public policy as a college student. World showed Gariffo’s vision of what the mid-21st century could resemble: a time when governments have collapsed and five “supercorporations” control all aspects of American life. These supercorporations not only run everything from the media to the shopping malls, they also take brand loyalty to terrifying new heights with battles for market share that play out as literal wars, often decimating cities.

After self-publishing the book, Gariffo got his master’s degree and pursued a career in consumer advocacy and climate change policy. But he recently decided to return to his debut novel and rerelease it with some of the newer, more professional services available to independent authors. Gariffo continued to receive positive feedback from readers over the years, but the main reason he never gave up on his first novelwas that the political and social commentary he built into his World seemed to only become more and more relevant to the present.

“I would see current events and think: ‘Wow. I put that in my book,’ ” Gariffo says, adding, “and a few things have happened that have been more outlandish than what I thought could be put into a dystopia.” Keeping this current state of affairs in mind, Gariffo began tweaking his novel, which follows Agent Sliver, the novel’s mysterious protagonist, who serves as a personal assassin and henchman to Fellrock, CEO of World, Incorporated. As one of the five supercorporations that essentially govern the country, World, Incorporated uses Sliver as a more subtle tool for silencing critics, keeping those under contract in line, or taking deadly jabs at the competition.

Gariffo does not immediately reveal Sliver’s origins nor the history of this dystopia, preferring to hurl readers into Sliver’s ultraviolent daily life from the first page. While he comes off initially as a classic tough action hero—a lone figure driven to avenge a mysterious event from his past, always ready to kill, and capable of jumping away from a bomb in the nick of time—Sliver also gives us our first view into the deeper complexities behind this new world of for-profit government. From his ship flying high in the air after completing an assignment, Sliver gives us our first bird’s-eye view of the new America:

This city itself was built literally and figuratively on the ruins of another, in that it was in the same location of its predecessor, borrowed its name, and the structures that made up that city had been reconstituted and recycled into many of the structures of this newer city. New Detroit was designed and rebuilt around the headquarters of World, Incorporated, as a testament to the company’s commitment to rebuilding the world with the prosperity of a futuristic society.

For Sliver, the corporation is neither entirely good nor bad. He commits heinous acts on their behalf, and they destroy lives on a regular basis. But all of this has become normalized for him, part of their commitment to rebuilding a prosperous society. What shakes up Sliver’s worldview—and allows Gariffo to introduce new perspectives on this volatile reality—is Sliver’s discovery of a young girl named Kelly, a girl who was raised with no knowledge of the world outside her parents’ small, isolated farm (which Sliver destroys in the novel’s electric opening).

Gariffo uses Kelly as an audience surrogate and introduction to one of the book’s most subtle but fascinating elements: two chapters dedicated to articles and blog posts that Kelly reads to catch up on recent history. These chapters become more than just exposition. They show off Gariffo’s expertise in public policy and in selling the rise of supercorporations as realistic. Gariffo himself loved writing this portion since it allowed him to play with numerous different voices, switching between authors and formats as he describes the ways in which cryptocurrencies and tax evasion slowly allowed for corporate mergers to run amok and steamroll over the government.

It’s an intelligent riff on dystopic exposition, creating something much less obviously exciting but much more unnervingly plausible than a zombie apocalypse or even a nuclear holocaust. It also plays directly into some of the larger questions about society that Gariffo deals with in his work and wanted to include in his writing: “It’s kind of similar to climate change in that it’s happening, it’s very real, but it’s happening a slow way…it’s still easy for people to avoid saying ‘Oh, that’s obviously climate change and we need to change what we’re doing in a big way right now.’ ”

At the time he was originally writing World, Gariffo was particularly interested in political communication. He merged his observations on the topic with classics that he loved, like Nineteen Eighty-Four,to create Sliver’s reality. “I was looking at how framing a communication and the media have a big impact on the way people at large see the world around them.” In addition to World’s news-as-exposition device, Gariffo further explores how the supercorporation maintains its control through a Steven Colbert–esque political satirist and leading religious figures. He also takes the idea to a sci-fi extreme, introducing the cyborg Rex, who receives messages from the corporation beamed directly into his head.

“It was important to me to represent the complexity of the real world,” Gariffo explains, “how it is a multitude of factors that change people on a personal level and on a large-scale cultural level.” To that end, nothing in World, Incorporated is cut and dried. Although Agent Sliver has little sympathy for the supercorporations, he does not necessarily think the world used to be better. He initially accepts the terms of the world set by these powerful entities and allows himself to be used by them to further his own personal agenda.

Despite its rapid pace and explosive sequences, it is these subtler questions of complexity that end up being Agent Sliver’s biggest challenge, and they are the same questions Gariffo faces today as both a consumer advocate and even as a self-publisher. (The irony is not lost on Gariffo that his novel was first made available on amazon.com, perhaps the closest real-life counterpart to a supercorporation.)

“My concern with really any organization,” Gariffo says, “is how they become means to dispel personal responsibility for harmful actions or to move the authority to act away from decent and caring people. And that is exactly the kind of thing I hope my novel might make people think about.”