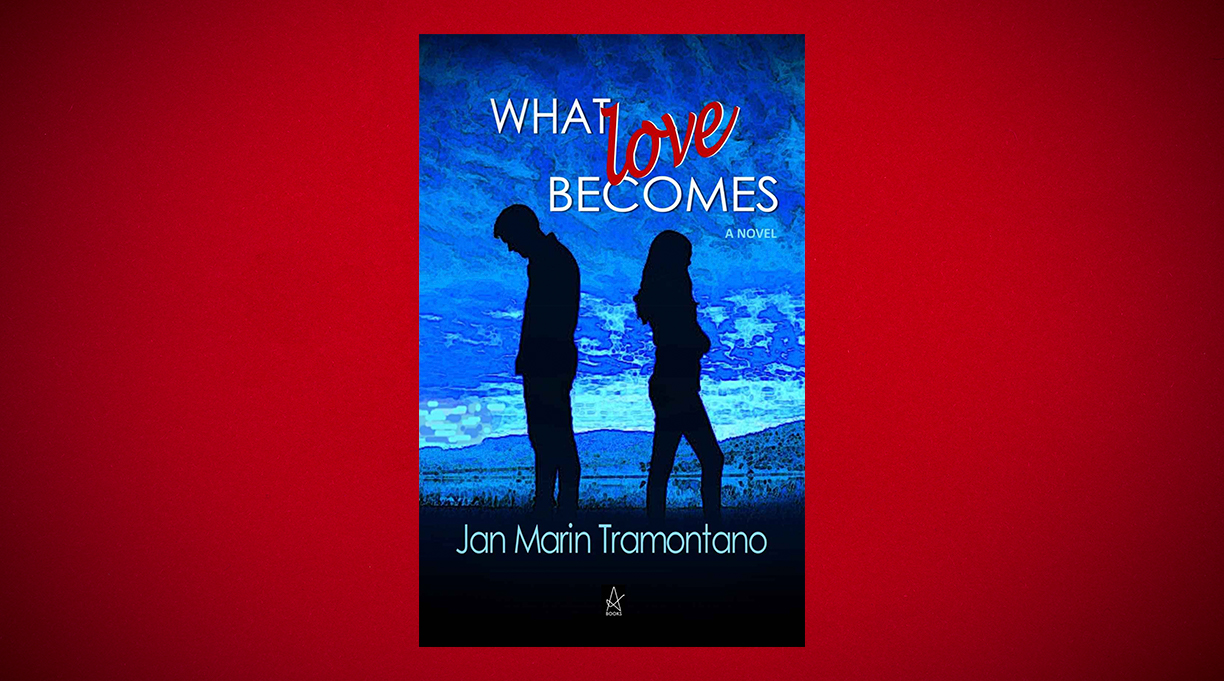 A marriage in crisis has frequently provided ample fodder for writers. Jan Marin Tramontano wanted to explore this subject but not in a sensational way. “So many marriage stories are based on extraordinary circumstances,” she says. She cites as a recent example The Guest Room by Chris Bohjalian, in which a marriage implodes after the husband holds an ill-fated stripper-populated bachelor party in his home. Tramontano took a more keenly observed approach in writing What Love Becomes, her second novel.

“I wanted to show what happens in a plain, simple life,” Tramontano, who also wrote Standing on the Corner of Lost and Found in 2011,explains. “The nitty-gritty about what most of us experience in terms of going into a life with someone and not really knowing ourselves, let alone who we are marrying, and the promises we make that we can’t possibly know whether or not we can keep.”

What Love Becomes concerns two couples in failing marriages. Willow, a school librarian, is estranged from her husband, Denny D’Angelo, a Persian Gulf War veteran. Against her wishes, he had joined the Marines just before they got married. D’Angelo returned from the war wounded by “an invisible enemy–nerve gas, deadly chemicals, and pollutants.” Willow’s dream of starting a family is shattered when D’Angelo argues that the pills he is forced to take cause birth defects.

Willow has fallen in love with Blake, a high school principal and her boss. He is unhappily married to Gillian, a dissatisfied and demanding woman who had given up dreams of becoming a ballerina. Just as both have decided to tell their respective spouses they will be leaving them, Willow is involved in a catastrophic car accident that leaves her in a coma. A fifth character that serves as something of a reader surrogate is Lilly Lerner, a newswoman and blogger, who reports on the accident and becomes caught up in the couples’ stories, which will inspire her to make changes in her own life.

Kirkus Reviews praises Tramontano for her ability to provide readers with “an authentic view into the lives of the characters. The author plays with the expectations people have going into marriages and how often they are disappointed—but also how the potential for change is often waiting somewhere on the next block.”

Tramontano hastens to emphasize that What Love Becomes is not autobiographical; the Naples, Florida, resident has been married for 40 years. (She dedicates the book to the “love of my life.”) The story itself, she says, was inspired in part by an actual incident involving a couple that was having an affair and decided they were going to leave their spouses. The woman was in a car accident. “I don’t know anything else about them,” Tramontano says. “But I thought that would be a good start for me (in writing about marriage).”

The verisimilitude of her writing is based on extensive research, particularly in the area of veterans. “It’s really important for me when reading a book to learn something new,” she says. “When I was [writing] my first book, I did some volunteer work, helping to get grant money for an organization called Soldier’s Heart, which is run by a psychologist who takes…veterans back to Vietnam as a way to heal them. I learned about this medication that was given to soldiers in the Persian Gulf War and the bad effects it had on many [of them]. I had not heard anything reported about that.”

She also met with veterans. One in particular was a Marine who spoke with her at length and became the foundation for D’Angelo. She writes his character with cleareyed empathy.

Denny is chronically victimized by his environment now. Triggers are unavoidable. The scent from a woman’s perfume, a fresh coat of paint on a neighbor’s house, even spring pollen, can set off days in the dark with migraines or debilitating allergy attacks.

She also spoke with reporters, including a current New York University professor who had been an Associated Press reporter in Africa and Europe during the book’s time frame. “She was very generous with me in sharing her experiences,” Tramontano says.

As to her authentic portrayal of marriage, she says with a laugh, “I talked to everybody I knew.” Their input crystallized issues that would resonate with readers through the book: Can women have it all? How does marriage impact personal ambition? What happens to the traditional when life happens?

Tramontano grew up in upstate New York. “Reading,” she says, “is in my blood.” She said she feels especially connected to her grandfather. “He was an immigrant. Not too long ago, I found letters in one of his poetry books that he wrote to my grandmother from the 1930s when they were apart. It was quite something to delve into them.”

A book about an immigrant family looms large in her reading life. When she was in the first or second grade, she says, Sidney Taylor’s All-of-a-Kind Family “really grabbed me. It had sibling rivalry (Tramontano has a brother and sister) and adventure. I just really love family sagas and stories about relationships.”

In high school, she became in thrall to short stories. “I still remember how I felt when I first read the ending to The Necklace by Guy de Maupassant. It blew me away.”

Between writing poetry and short stories, it never occurred to Tramontano that she would one day write a novel. For 20 years, she was director of a cancer prevention program for the New York State Department of Health. She launched a freelance writing business, mostly grants and technical papers, but after she was published as a poet and short story writer, she took on more creative projects. That evolved into becoming a writer full-time. She didn’t start her first novel until she was “well into my 50s.”

Tramontano says she never shared her writing until she was invited to participate in a workshop. She recruited a best friend to read a story to the group. “I was very nervous,” she recalls. “My heart was pounding. I couldn’t read it. I’ve changed since then. Now you can’t shut me up.”

In pondering where her characters might be in five or 10 years, she is asked whether she might consider revisiting them in sequel. “Probably,” she responds. “The one who might interest me most is Lily, as her life is so unsettled and there are so many directions in which she could go.”