A Children’s Classic Is Born 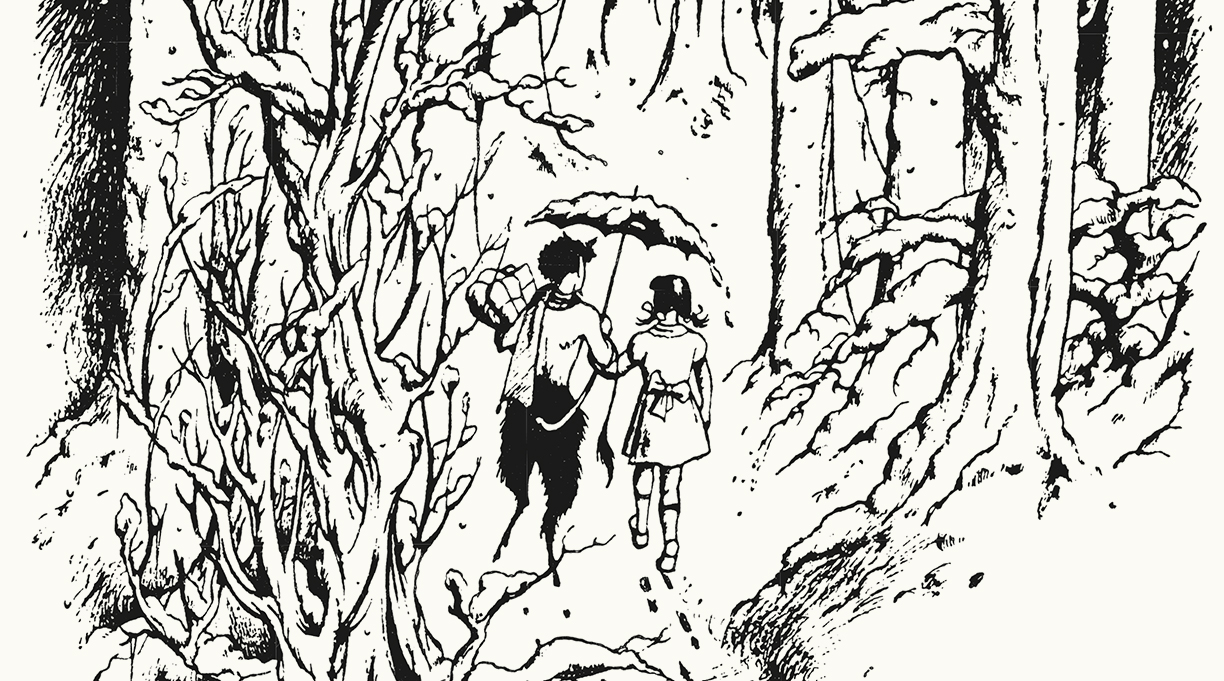 A hero’s quest begins with displacement and a call to adventure. In the case of C.S. Lewis’ children’s novel The Lion, the Witch, and the Wardrobe, first published in 1950, four young Londoners are removed to the countryside during the Blitz and sent to a sprawling manor house owned by a “very old man with shaggy white hair which grew over most of his face as well as on his head.”

Peter, Susan, Edmund, and Lucy Pevensie take to the old Professor, who, despite the objections of a prickly housekeeper, gives them the run of the place. And so it is that while exploring the manor, Lucy finds an old wardrobe, “the sort that has a looking-glass in the door” (shades of Alice’s Adventures in Wonderland), and, poking around in it, discovers the portal to another world. There she encounters a hurried, worried Faun (shades of the White Rabbit), surprised to find a “daughter of Eve” in a world ruled by a very unpleasant witch queen.

Lucy makes her way homeward. She keeps shtum, but Edmund finds the portal into the White Witch’s snowy woodland. He soon meets the Witch herself, who beguiles him with promises of princedom and an endless supply of sweets. She is, Lewis tells us, a daughter not of Eve but of Lilith, Adam’s first wife—things get complicated in ancient Middle Eastern mythology—and has every bit of her mom’s seductive powers. Edmund is hooked, one of the Witch’s enchanted minions. So, at any rate, a talking beaver tells Peter: “You can always tell [who they are] if you’ve lived long in Narnia; something about their eyes.”

The White Witch has other things to worry about, for a grandly maned lion named Aslan is closing in to bring down her evil kingdom. In a fierce battle involving wolves, ogres, minotaurs, specters, giants, dryads, ghouls, and “the people of the toadstools” (whomever they might be), the lion falls—only to come back to life, defeat the Witch, and place the children on each of the land’s four now-vacant thrones.

Youngsters were hooked, and Lewis, already a well-established Christian apologist (think Jesus as lion, the battle as a warm-up to Armageddon), would soon add six more books to the Chronicles of Narnia series. One reader who was less pleased, though, was Lewis’ fellow Oxford professor J.R.R. Tolkien, who grumbled that the Professor was clearly modeled on the Gandalf of his then-new Lord of the Rings series and its precursor, The Hobbit. Moreover, Tolkien objected to what he called the “patchwork mythology” of Narnia, where Lewis mashed up Greek, Roman, Christian, Celtic, and Germanic lore, throwing in a rather bewildered Father Christmas to boot.

Tolkien had a point, though his books were overshadowed by Lewis’ until the 1960s, when hippies took them to heart and started calling themselves Frodo and Strider. (They studied the ways of the toadstool people, too.) Lewis decamped to Cambridge, and the friendship of the two scholars was a touch brittle ever after. Still, both their series have endured—indeed, have never gone out of print—and, classics of literature, continue to enchant readers young and old today.