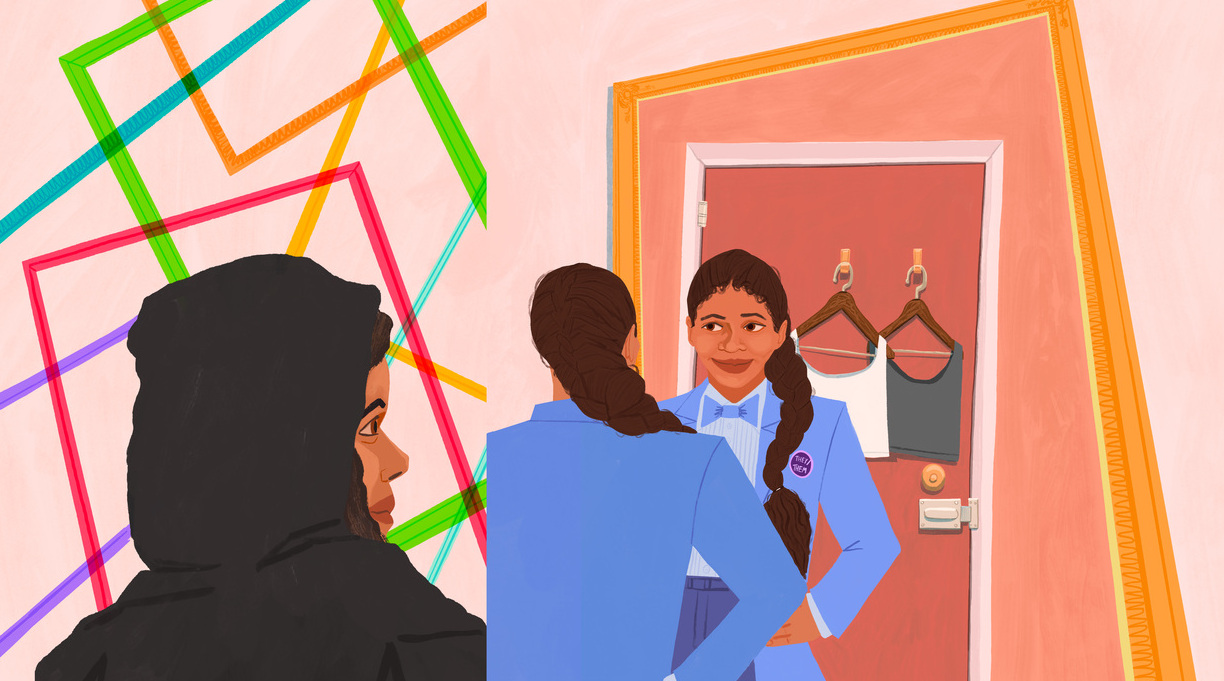 Middle school, for youth of marginalized communities, can be among the most harrowing of experiences, from the psychological wounds of bullying to the often bumpy and tangled roads toward self-discovery.

In their debut middle-grade novel, The One Who Loves You the Most (Levine Querido, May 31), medina reimagines what growing up queer, nonbinary, asexual, and adopted could look like with the support of steadfast friendships and mentorship from adults who reflect our own identities back to us. The novel’s protagonist, Gabriela, is a Honduran middle schooler adopted by a single White mother who yearns for friends that will accept them as they are. When two new students—Abbie, a trans intersex girl, and Héctor, who is bisexual and genderfluid—enroll in their school, Gabriela goes through a formative education in expanding their lexicon on LGBTQ+ identities and expressions and, for the first time, begins to see and express themself for who they authentically are. As medina says, “The characters came to me because they heard my call.”

The author spoke to us at length about their motivations for writing this novel and the urgency to publish work that reflects diverse and complex identities. The conversation has been edited for length and clarity.

In recent years, the experiences of LGBTQ+ youth have changed drastically and, seemingly, quickly. How would you say your experience as a middle schooler compares to Gabriela’s?

I was in middle school in the early 2000s in Maine, so there wasn’t discussion around LGBTQ+ issues. I’m not sure if that’s just where I grew up or the time, generationally. But I definitely have some commonalities with Gabriela in terms of their whole demeanor: their introverted nature, being cautious, a little reticent. But I also think that is compounded with all of their identities and the complexities of their identities and trying to figure out who they are and where they sit in the world.

I would attribute that to not feeling safe to be themself. I spent most of my middle school experience in survival mode. I was bullied up until the time I met a new friend in seventh grade. I truly believe that having one true friend makes all the difference. She gave me permission to be myself. It was because of her love, attentiveness, and care for me that I felt safe. I could express all parts of me and begin to share with someone that I trusted (other than my mom) that I might be gay. That friendship unlocked something inside of me, and I was more free and authentic than I could have ever imagined I could be. That’s the power of being seen.

How about adult mentorship?

In middle school, I was really obsessed with writing, so my mentors and people I admired were my English teachers.

The theme of seeing and being seen, of representation, comes up often. Would you say the need to represent diverse forms of identity and gender expression drove the writing of this novel?

It is so validating when you see something or someone that reflects you. For me it’s about normalizing that people are queer, people identify in different ways. I wrote from a place of identifying with the main character. So I do identify as nonbinary trans demisexual lesbian. Most of what I write is rooted in the longing for connection, chosen family, friendship, and community.

What, if any, novels did you see yourself reflected in as a youth?

I wrote more about this in my We Need Diverse Books essay. The short answer is, I didn’t really see myself in books. I had to compartmentalize different aspects of myself, so I would read a book about race or a book about adoption or a book about disability, and then I had to reimagine what that would look like if that was the whole person.

Unlike many other novels, which privilege romantic relationships as the driving force of the plot, hereGabriela’s friendships are the force that occasion tremendous change. Was centering friendship an intentional decision? How did these characters come to you?

I do not know the longing for romantic relationships, but I am no stranger to wanting friends. All I ever wanted was a friend. When I began writing my book, I had originally only envisioned Abbie as a new friend because I knew I wanted to confront the complex feelings and questions around gender identity. And then Héctor appeared. And I began to realize that it was not only friendship that I was longing for, it was community. A place where no one is denied entry. A place where no one’s humanity is denied because everyone has the right to belong. Even Jonathan, who bullies Gabriela throughout the beginning of the novel, has redeemable qualities. Everybody does. An environment where someone is given a chance and seen for their best self can compel them to grow.

In my writing, the core of my fundamental values and beliefs are revealed. They’re all birthed out of an emotional unmet need. The unmet need in The One Who Loves You the Most is community. The heaviness of wanting desperately to be in community with people who love me with abandon has followed me like a dark cloud my entire life. I write contemporary children’s books, but to me, they often feel utopian or fantastical. I feel I am radically reimagining how life could be and should be. There’s love that flows in all directions. It’s a full and bountiful type of nonjudgmental love that offers understanding and pushes us to grow and do better in a way that is nurturing. This particular type of love was something I had never experienced. I was always on the outside, tiptoeing at the perimeters looking in and wondering what parts of myself I needed to bend, break, or contort in order to fit in. I would stand at the sidelines, unwilling to abandon any parts of myself to fit in, and so I’ve always been unsuccessful in finding a way in. The characters came to me because they heard my call.

Another of the novel’s central themes is duality. As Gabriela says, “Two cultures. Two separate sets of rules—rules I never felt I had access to.” This can be true for many first- or second-generation children, who must negotiate their inherited cultures while navigating a dominant White American culture that forces assimilation. Do you have any words of wisdom for young people caught in this double bind?

To be honest, I still struggle with the conundrum of being adopted. Like Gabriela, I also grieve my birth culture, birth family, and birth country. What made a difference as a transracial adoptee was going back to Honduras, finding community and longtime friendships with other adoptees. I would say follow whatever your heart is compelling you to do. Celebrate yourself. Align yourself with people and things that make you feel happy and whole.

The act of writing is a third theme that emerges again and again throughout the novel. Of Gabriela’s big English project, Mr. Shapiro says, “[The] story isn’t about knowing who you are, but about telling your story.” Is writing an act of liberation? Or perhaps one of reflection and self-discovery?

Writing is a self-reflective act and can be very transformative. Writing also empowers us to speak our truth. When we are being authentic and honest and are no longer silent, we have the capacity to build true friendships and community. Writing is not only an inward act; perhaps the most powerful act is outward. It’s action. Part of showing up and doing the work is speaking up. Speak up to make a change. Silence won’t set us free.

Roberto Rodriguez is a Poe-Faulkner Fellow in Fiction at the University of Virginia.