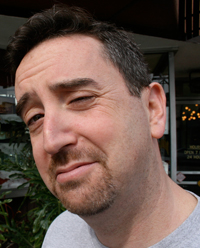 “Comics are a tricky medium,” admits Adam Beechen, who has a decade of experience working with the medium. Much of Beechen's work has been done for the large publisher DC Comics, where he wrote Batman Beyond and worked on series including Teen Titans and Justice League Unlimited, but when he decided it was time to release Hench, he knew that self-publishing was the right route for his graphic novel.

Hench was conceived as a two-volume work; the first part was published in 2004 by AiT/Planet Lar and illustrated by Manny Bello. When Beechen was ready to work on the second volume, he had a problem: “The original publisher had gone out of business,” he says, and Bello was no longer available to illustrate. “I was left with a half-finished graphic novel.”

Beechen knew that he wanted to complete Hench, but he also wanted to take the time to put together a book he was satisfied with. It took eight years before the second edition of Hench, which included both the original volume and the sequel, made its way into the world. “I have the story told the way I want it told,” Beechen says. Since the book was released in 2012, he has worked to get that story out into the world of comics fans.

Readers and critics have been receptive to this exploration of the henchman, the oft-neglected background character so essential to the master criminal's plan. Hench is the story of Mike Fulton, a one-time college football player who first hires himself out in the role of henchman as an alternative to the boredom of his dead-end job and then returns to the criminal world's second string in order to pay his son's medical bills, resulting in tragic consequences. “The story really sells pretty well by itself,” Beechen says. “The idea of exploring what those characters are all about brings a smile to people's faces.”

Kirkus Reviews was among those celebrating the book's strengths, with a review that calls Hench “an entertaining, thoughtful spin on the superhero comic, cleverly focusing on the kind of character always left in the background....Touches of humor and a well-informed understanding of the genre (several panels are hat-tips to comic-book greats) help bolster the story.” Other professional and fan reviews have been similarly enthusiastic, and Hench has slowly made its way to a broad range of fans.

Early in the self-publishing process, Beechen found himself facing a challenge that confronts all small and independent creators of comics and graphic novels. “If you want to get into a comics shop, you have to go through Diamond [Book Distributors],” Beechen says. But he knew there was no possibility he could meet Diamond's requirements for quantity and discount. “There was no way we were going to make a profit off of it,” he says, so instead he has made most of the book's sales himself, taking cartons to comics shows and conventions around the country, emptying the boxes one sale at a time. His most recent trip, to Phoenix ComiCon, brought Beechen back to his hometown to share his work.

Beechen also had to adapt his self-publishing plans to the collaborative nature of comics. He readily admits that his forte is writing, not illustrating. “I leave that to talented people,” he says. For Hench, that meant hiring Ethen Beavers as the artist for the second volume of the book. “It is expensive to hire an artist to draw a book of that length knowing you're not going to get your investment back,” Beechen says, but he did not have the option of offering Beavers partial ownership of Hench, because he had already shared the rights to the property with Bello, the original artist.

Beechen has nothing but praise for the result of his collaboration with Beavers, which developed out of a series of back-and-forth exchanges over the course of a year—all by phone and email. “We never sat in a room together,” he says—the story and art were set, and a letterer added Beechen's words to Beavers' images.

The production of this new edition of Hench took more than a year because Beechen and Beavers were both focused on their day jobs. “Comics has been sort of a side gig for me,” says Beechen, who works primarily as a writer for television shows including The Wild Thornberrys, The Batman, and Rugrats, while Beavers was busy with his work as a freelance artist and illustrating books including Michael Buckley's N.E.R.D.S. series.

Once the creative work was done, Beechen was pleased to discover how easy it was to turn out a finished book. “I was able to provide CreateSpace and the folks at Amazon with what they wanted so easily,” he says. “The next thing you know, there's a book, more or less.” Although many comics have found success in digital format, Beechen knew he wanted a physical book, something he “could hand to anybody at a moment's notice,” he says, especially producers interested in adapting the story and characters in other media. Hench has been optioned for television, first by Warner Brothers and then by NBC, although nothing is in production yet.

While Beechen would be happy to see Hench become a transmedia success, he says that money was not his primary reason for developing the story: “Hench was just for the pure joy of it.” While he enjoys the writing he has done on some of the comics world's most famous properties, “working for Marvel and DC,” he says, “you're still playing in someone else's sandbox.” Beechen is happy to share the sandbox, but is also glad he has been able to build a small one entirely his own.

Sarah Rettger is a writer and bookseller living in Massachusetts.