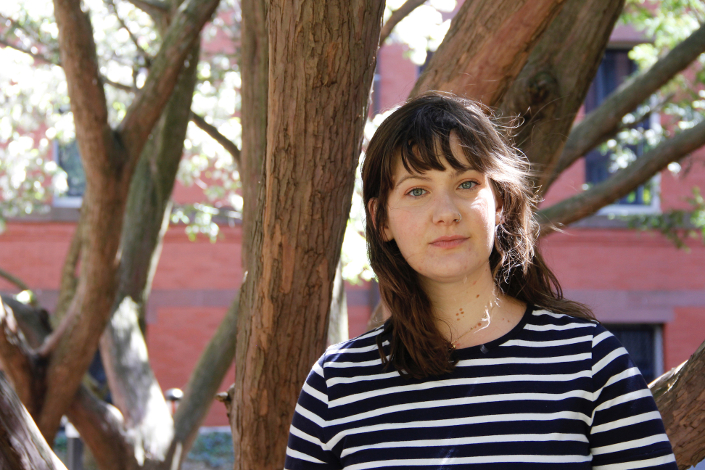 How is it that Alice Bolin’s outstanding debut, Dead Girls: Essays on Surviving an American Obsession, thrums with life?

“A lot of these stories that purport to be about dead girls are about anything but,” says Bolin, describing the TV genre she calls “the Dead Girl Show,” whose action centers around a young female corpse (e.g., Twin Peaks, Pretty Little Liars, True Detective, etc.).

“They’re really about [other] people picking up the pieces, making things right, and being able to move on,” she says.

In examining our collective penchant for this particular narrative, Bolin, whose nonfiction is widely published (Elle, Los Angeles Review of Books, Salon, etc.), vigorously interrogates her own fascination, and the experience of growing up white, female, and bookish in the American West.

“In the process of writing this book, my editor pushed me to be more personal,” says Bolin, who is a visiting assistant professor of creative writing at the University of Memphis. “I was thinking in terms of cultural criticism and bringing themes together, instead of thinking, Okay, why are these ideas important to me? Why am I drawn to writing about them? Dredging up some of those things I never intended to write about was difficult [and] uncomfortable.”

From coming-of-age in Idaho, through an early-twenties move to Los Angeles, Bolin contends with complicated antagonisms ranging from consumerism to toxic masculinity through her complicated appreciation for her varied formative influences: the pop songs of Britney Spears, the essays of James Baldwin, the criticism of James Baldwin, the poetry and prose of Eileen Myles, and, perhaps especially, the nonfiction of Joan Didion.

“I didn’t want to question narratives about brainy, sad white women growing up or breaking down as they earned their cruel sentimental educations,” Bolin writes in “Accomplices,” “because they assured me I wouldn’t have to work on myself: the world would work on me.”

And yet, the essay concludes: “The only way to grow up is to realize that the little tragedies that shock and devastate you are actually universal and inevitable.”

Bolin’s process for many of Dead Girls’s essays began by rereading (and re-listening), and journaling her responses.

“I would take out my journal,” Bolin says, “and I would just write what I was thinking about. In the end, a lot of that was sort of cobbled together to create [each] essay. It was more organic and free... reflecting the journey my mind took as I researched each essay. So, you could read the journal entries together and they wouldn’t make that much sense, but they would reflect a lot of what ended up in the real essay.

"My favorite essayists,” she says, “are ones who give you a glimpse inside their mind.”

This is the kindness she pays readers, with a rigorous collection that’s not for the faint of heart, nor flabby of mind: “The author’s voice is eerily enthralling, systematically on point, and quite funny,” Kirkus writes, “though at times readers may not fully understand the motives behind their laughter.”

“This book is about the American West,” she says. “About the Northwest, about California, and what it means to grow up as a white woman in this culture that prizes white women as the ultimate victim or virgin martyr. What it means to come of age in a culture that wants women, especially white women, to stay the pretty teenager corpse forever.”