Get Fit With Alison Bechdel 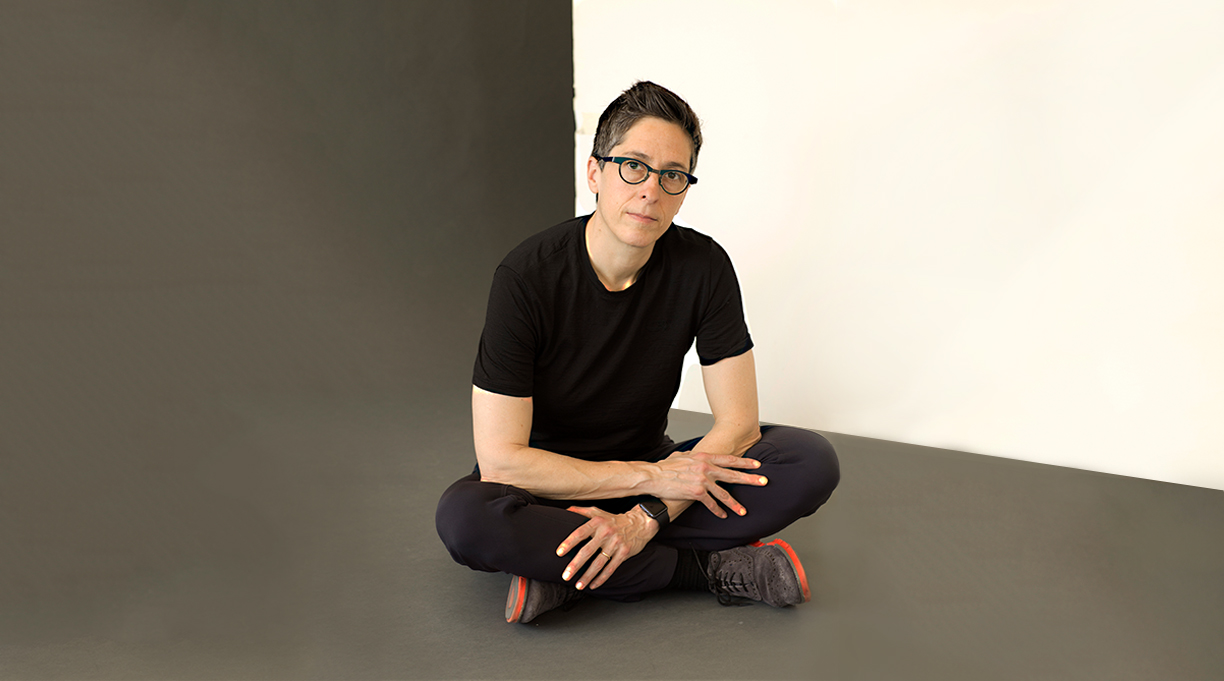 Alison Bechdel, acclaimed creator of the “Dykes To Watch Out For” comic strip and award-winning author and illustrator of the masterful graphic memoirs Fun Home and Are You My Mother?, is one of the most acclaimed and respected cartoonists working today. A MacArthur and Guggenheim fellow, Bechdel is known for her incisive explorations of sex and gender and meticulous excavations of twisted family history. As we see in The Secret to Superhuman Strength (Houghton Mifflin Harcourt, May 4), Bechdel is also a fitness freak. “Yet this book is about more than just exercise,” writes our reviewer. “Bechdel’s work always encompasses multiple interlocking themes, and here she delves into body image; her emerging gay consciousness; the connection between nature and inner meaning”; and many other relevant themes. I spoke to the author via Zoom from her studio in Jericho, Vermont. Our conversation has been edited for length and clarity.

Why did you write this book now?

After writing these heavy family memoirs, I thought my exercise life would be a fun, timely topic. Not just because I have always liked exercise. It’s a very capacious subject, allowing me to work a lot of other stuff in, including ideas about getting older and the changes we go through.

The concept of the mind-body connection runs throughout the story.

Yes. I have liked doing physical stuff from a young age. At a certain point, I noticed that I would actually feel kind of euphoric, where I wasn’t in my usual incredibly self-conscious state. My normal condition was to be very aware of myself, and physical activity could lessen that and give me relief. When I got older, I learned that you could get there with drugs, as well. So the book becomes a sort of quest for what is happening in those moments when we’re feeling that kind of peace and bliss. For me, it’s about transcending this self that I spend most of my time in, which is really kind of a false construct. We’re all connected to each other in some way.

You write that “being exhausted is one way to stop thinking.” Have your exercise routines helped you get out of your own head and focus your creativity?

I didn’t try to draw too many direct lines between the activities I was doing and the ways that it affected my creativity, but in some cases I do—for example, bodyweight exercises, around the time I was 40, when I was able to do a pullup. I was able to push myself out of my own way, which was part of what enabled me to do this difficult project of writing about my own life and family. In my 30s, yoga showed me how to turn my attention deeply inward and to experience whatever was happening as I did a yoga pose—not necessarily as pain but as a series of distinct sensations. That helped to focus my writing about real experiences, and my work got a lot richer at that point.

Where are you now in your fitness journey?

I still do a lot of things but not as intensely as I did at other points in my life: yoga, biking, stretching, skiing. But the thing that really came around in an interesting, full-circle way was running, which I did as a young person and really loved. I stopped doing it at a certain point, partly because I had an injury and partly because running is hard. I was happy to have an excuse not to do it. As I look back, I see that the time in my 30s when I stopped running was the time I started drinking. My book also looks at my drinking behavior and how I struggled to curtail it. Running absolutely helped. It’s like an anti-anxiety drug, and it calmed me down without having a bottle of wine or a couple beers every night.

Are exercise trends and fads proliferating especially rapidly these days, or is it just part of a normal historical progression? And how has the pandemic played into it?

It’s been such a weird intersection of the beginning of the pandemic with wherever fitness was going. More and more people are doing stuff like Peloton, but that and other similar programs are private in your home. I feel bad because in this pandemic year, I stopped going to the gym, and I could not get myself to do my weight routine at home. It was easy if I was leaving the house, but I can’t motivate myself at home. I bought some [equipment] for my basement, and I just walk past it every day. Then Apple Fitness+ came out, with a bunch of workouts for reasonable fees, and you can have a trainer tell you what to do. First I thought that was bullshit, but now I find it’s a good way to motivate.

Sidestepping into process, could you discuss how you approach writing and illustrating and how they come together?

I don’t know how other cartoonists do it, but I write in Adobe Illustrator. I have my dialogue and narration blocks set out visually, and I’m imagining what those images and words will be—at first not in any detail. When I come to actually draw the images, I begin an intense process of research, looking things up and sketching, and then I’ll go off on some tangent because I find something interesting on Google. Sometimes that diversion will change the way a panel is laid out or the sequence.

What about your relationship with your colorist, Holly Rae Taylor?

With my deadline approaching, I knew there wasn’t enough time to do all the coloring myself. Fortunately, Holly stepped in. We did this thing that’s kind of like an old-fashioned comics technique. She wasn’t working with any color media at all; she used different gradations, and she would make a cyan layer, a magenta layer, and a yellow layer for each page. It was like a mathematical puzzle and not at all like an organic experience of coloring, you know, beautiful blue skies. There’s all these layers upon layers, and it was hard to remember and keep track of everything. It was an all-consuming process.

Can you discuss how the tumult of the past few years has affected your work?

The whole Trump era was demoralizing, depressing, and crazy-making. I felt like, Why am I writing a book about exercise? It seemed absurd. But I had to pull out of it. When the pandemic hit, I was absorbed in this project, and just doing this drawing was a huge gift. I felt grateful to have that focus when there was so much bad news everywhere. I also began to see some themes of the book manifesting in the world: We need each other—we are interdependent—and what illustrates interdependence more vividly than a pandemic? It’s like we’re one big organism, and if one of us gets sick, others will, and we have to address it as a group. So it was cool to see this awareness, at least in half the population; the other half seems to have left reality.