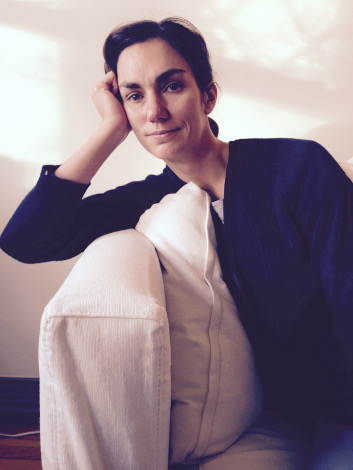 In 10 short stories, Amie Barrodale’s debut collection, You Are Having a Good Time, initially looks like it’s about normal people doing normal things. Then the strange or dark or unseemly things seep out. The borderline bizarre scenarios in this collection stay in the realm of plausible because of Barrodale’s clean prose and matter-of-fact storytelling. But it’s hard to know if what we’re reading is weird or if what we’re reading happened to our neighbor, our therapist, the author, or ourselves.

The likelihood of all the stories makes them seem related, but they’re not. They weren’t even compiled with an eye toward publishing a collection; they came about individually and organically. Barrodale wrote some of the stories when she was working on an MFA at the Iowa Writers’ Workshop, and others written later, all over the course of about seven years.

Having worked full-time as an editor prior to focusing on her own work, Barrodale’s dual perspective as author and editor has definitely had an impact on her writing. She says she’s very open to edits and suggestions. “I really value editorial feedback,” she says. “I don’t feel touchy and strange about changes, maybe even to a fault.” This might explain why, when she presented her first draft of a novel her first week at Iowa, the negative feedback resulted in her abandoning the project. But luckily for readers, a few stories in this collection were born out of that concept.

The first story, William Wei, has already lived in the spotlight as it garnered Barrodale The Paris Review’s 2012 Plimpton Prize. The story’s title character is, at first glance, a womanizer taking home unnamed women for arbitrary reasons. Then, when he becomes entangled with a woman named Koko who allegedly saw him at a party and got his number, the tables turn, pitting William as the arbitrary choice. Barrodale says the story was meant to be the beginning of that scrapped novel. Pair that with “Catholic,” the story that Barrodale intended to be the overarching concept of the novel, which is about a more-emotional-than-physical affair a magazine editor has with a drummer on the rise. It’s fun to imagine how these stories could play together to make a larger whole, but it’s equally as pleasurable to read them as individual, self-contained pieces.

“All the stories, except the very last one, are about romantic failure. Or the realities of romance,” Barrodale says. In this collection, “realities” often equals “disappointments,” but it sometimes seems like these characters are directly setting themselves up for disappointment. They go head first into less-than-ideal scenarios (cue the

drugs, unhealthy rivalries, destructive omissions, and other uncouth behaviors). This diving-in to mistakes feels more authentic to life, according to Barrodale. “In my 20’s living in New York, I was always avoiding getting involved with the people I liked because the situations were wrong,” she says. “But then I recognized at some point that the situations were always wrong, and keeping myself at the edges of them was not protecting me at all. I was still in a situation. I mean that I think there is no good situation. The idea of finding a good situation is, I think, the problem.” Trying to avoid bad situations isn’t the path of least resistance; it’s not a path at all. So Barrodale’s characters do not stay at the edge. They get into the thick of it for better, or, more often, for worse.

Barrodale’s ability to pull from her own experiences, or, in some cases, true stories that she’s heard or read about, grounds this collection in the real, the plausible. In “Mynahs,” students recount John Berryman’s behavior that led to his termination at a university (which plays very close to the rumored real story). Or in “Animals,” there’s the director modeled after Stanley Kubrick who, as Barrodale had read, famously exhausted his actors by repeating scenes over and over, just like the insatiable director in her story.

There are hints throughout the collection at deeply personal accounts, where Barrodale says, she’s “a little worried about some people getting angry about it.” But readers can draw those conclusions all on their own. Knowing the salacious details and autobiographical moments can be fun, but it isn’t essential to loving a collection so beautifully wrought as this; you can still have a good time.

Steph Opitz is a writer living in Minnesota. Her reviews have appeared in Marie Claire, Departures, Garden & Gun, and elsewhere.